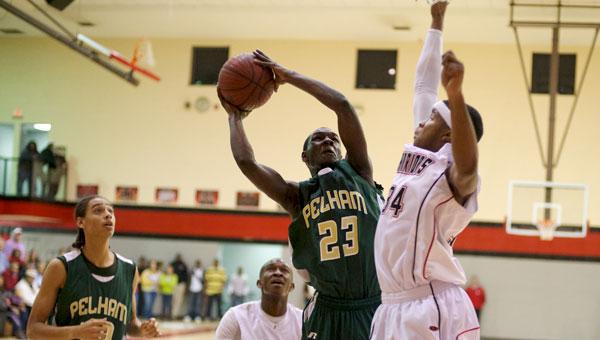 Floyd does know the last time Pelham won an area tournament championship — the 1996-1997 season — thanks to the tournament trophy in the school’s display case in its gymnasium.

The second-year coach has the Panthers back in the postseason and in the hunt for its first area tournament title in 15 years following a 67-63 win over rival Thompson in the Alabama High School Athletic Association Class 6A, Area 10 tournament semifinals Feb. 11 on the Warriors’ home floor.

Pelham, which clinched a spot in the sub-regional round of the Class 6A playoffs, will meet Hoover in the Class 6A, Area 10 tournament championship game Feb. 14 at 7 p.m. at Thompson High School. 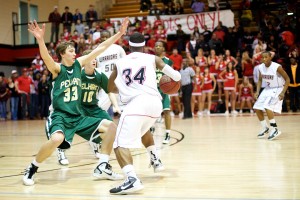 “It is very tough to win that third game,” Floyd said. “They did it to us last year.”

Xavier Lacey, in his second game back after missing most of the regular season with an injury, and Jordan Brooks added 10 points each. Tanner Rice chipped in seven points.

Ryan Coleman added 13 points. Demarcus Threatt, who was held to 2-of-12 shooting from the floor, and Kenny Nabors contributed seven points each. 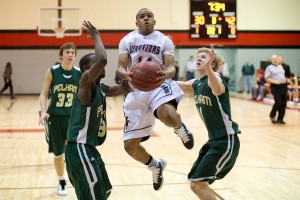 Thompson's Ryan Coleman tries to split a pair of Pelham defenders during a drive to the basket. (Reporter Photo/Jon Goering)

The Warriors tied the game at 16-16 early in the second quarter following a pair of free throws by Coleman before Pelham slowly increased its lead late in the first half. The Panthers ended the first half with a 22-10 run, capped by a layup by Qadash Williams with 27.5 seconds remaining in the second quarter, and carried a 42-30 lead into the locker room at halftime.

The Panthers finished with 14 assists on 18 field goals and shot 70 percent from the floor in the first 16 minutes of the contest. Tony Williams led Pelham with 12 points in the first half.

Thompson made a furious rally in the fourth quarter. The Warriors opened the final period with an 8-0 run, capped by a 3-pointer by Jaalen Jones with 6:22 remaining, to cut the lead to 53-49.

Jaylon Jones drained a jumper with 3:40 remaining in the contest to turn it into a one-possession game at 57-54. The Panthers pushed their lead to as many as five points before a layup by Coleman with 1:15 remaining cut the lead down to 62-60.

However, Reilly drained a perfect 4-of-4 attempts from the charity stripe in the final minute to clinch the victory for Pelham. 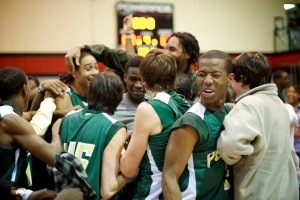 The Pelham Panthers celebrate their victory at half court of the Thompson gymnasium following their victory over the Warriors. (Reporter Photo/Jon Goering)

Floyd praised Lacey and Brooks for stepping up in the area tournament semifinal contest. Brooks, a burly presence in the paint, didn’t miss a shot as he scored 10 points in the second quarter to help the Panthers take a double-digit lead into the locker room at halftime.

“Having Xavier back was really big for us,” Floyd said. “He’s a difference-maker. Jordan is a mismatch for everybody with his size. Tonight he stepped up.”

Floyd expected to be at full health for the first time this season in the area tournament semifinal before senior forward Tyler Minyard suffered a concussion against Tuscaloosa County in the Panthers’ final regular season game. Floyd said Minyard’s availability for the championship game against Hoover was uncertain following the win over Thompson.