Seniors shake it during Zumba 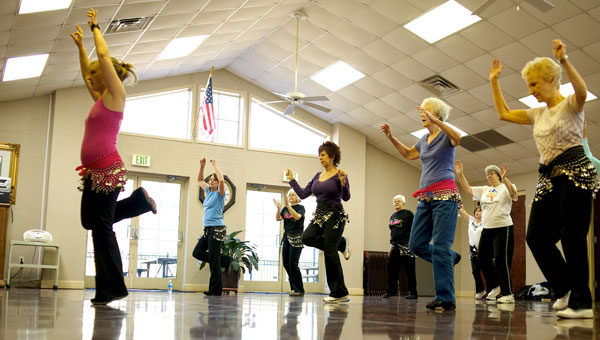 Area seniors work out during a Zumba class at the senior community center at Heardmont Park on Feb. 11. (Reporter Photo/Jon Goering)

NORTH SHELBY — As the women gyrated to a heavy Latin beat, Zumba instructor Kim Knight exhorted them to keep moving.

Although all the participants were 55 or older, they kept the rhythm going through the end of the song. Heardmont Park Senior Center echoed with cheers when the music stopped.

Knight said for the seniors, participating in Zumba is so much fun they forget they’re working out. 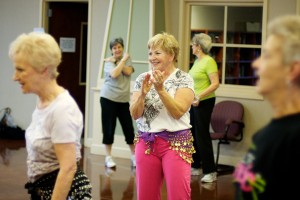 Sandra Alliston smiles and claps following a dance during a Zumba class at the senior community center at Heardmont Park on Feb. 11. (Reporter Photo/Jon Goering)

“There is no dance experience required,” Knight said. “You don’t even know you’re working out. We’re just trying to get the word out that this is here.”

The class began in April 2010 with a handful of participants, but has grown to include 25 since.

On Feb. 11, more than 20 women gathered for their weekly Zumba class. Most of them wore festive, brightly colored wraps, festooned with small gold or silver dangles, around their hips.

On a table, waiting for the end of the workout, sat a large glass plate filled with heart-shaped cookies. Each cookie had a message, such as “Zumba hottie!” or “Feel the music,” written on it.

Knight said people enjoy the class because it’s informal, not strictly structured, as are other workouts.

Rena Coleman and Sandra Craft are two of the founding members of the Zumba class at the senior center. Both said they’ve enjoyed seeing the class grow and meeting more seniors.

“We thought the people our age would just enjoy being together,” Coleman said.

Craft said those at Zumba don’t take themselves too seriously.

“When you watch it, you find it funny,” she said. “It makes you laugh.”

Classes are on Friday mornings at 9 a.m. and last for approximately 45 minutes. Zumba is free for participants 55 and older. For more information, call Shelby County Parks and Recreation at 991-2015.