THS students take to the skies 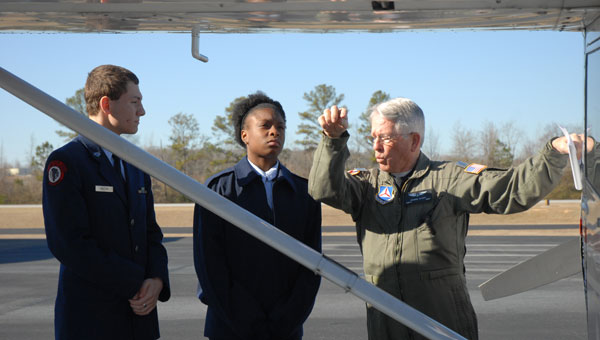 Members of the Thompson High School Air Force Junior ROTC took to the skies in a pair of Cessna aircraft Feb. 12 as they practiced what could one day be their profession.

Sixteen members of the Junior ROTC and several members of the Civil Air Patrol packed the Shelby County Airport as they covered every aspect of flying an airplane.

“The Air Force actually gives us some limited funding to take some kids up each year,” said Col. Eldon Woodie, commander of the Junior ROTC. “This is the third year in a row we have done this, and it doesn’t cost the kids anything.

“We try to take about 25 kids up every year,” Woodie added. “At least three-fourths of these kids have never been in any kind of airplane at all.”

Many of the ROTC members seemed nervously excited before boarding for their flights, which is something Woodie said he sees every year.

“They try to act all cool and collected today, but some of them get really excited,” he said. “I see what a lot of the people out here don’t see.

“The next day at school, I will see the kids talking to their friends, and they will ask ‘What did you do this weekend?’ ‘Well, I went flying,’” Woodie added. “There are a lot of great things that come out of this.”

“I’ve never been higher than a 50-foot rappelling tower in my life,” McAlister said, noting he one day would like to join the Coast Guard. “I’m more excited than nervous.”

Gustavl Perez, a Junior ROTC cadet and THS 10th-grader, said he was surprised at the size of the Cessna’s interior.

“It was pretty cool. I wish I would have sat in the front seat instead of the back,” Perez said a few minutes after his plane landed. “I’ve been in commercial jets before, but this one was really different. It’s so small inside.”

Even if the Junior ROTC cadets don’t pursue a career in the Air Force in the future, taking to the skies can provide other benefits in the classroom, Woodie said.

“For example, if the kids are taking physics, something like Bernoulli’s principle can seem a little abstract,” Woodie said. “But when they actually get a chance to learn about the weight and the balance of an aircraft, it gives them a practical application of what they are learning in school.

“That’s the real reason I love doing this,” Woodie said.