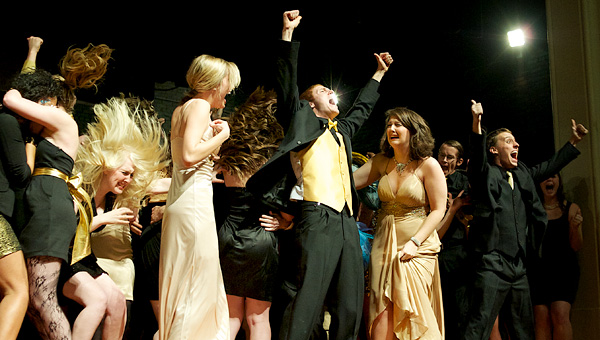 The Gold team reacts after their victory was announced following the College Night performances on Feb. 12 at the University of Montevallo. (Reporter Photo/Jon Goering)

MONTEVALLO — Breaths were held throughout Palmer Auditorium Feb. 12 as the Student Government Association president parted the sea of purple- and gold-clad students on stage to announce the winner of the 93rd annual College Night.

After the traditionally drawn out speech of SGA president Patrick Talley, Gold was announced the victor when he concluded with their side’s catch phrase, “This is our fairy tale.”

The auditorium burst into cheers from students and alumni alike as the Gold side celebrated its first College Night win since 2007, successfully breaking Purple’s three-year winning streak.

As Gold side members jumped up and down, embracing, cheering and crying with excitement, Purple students solemnly held two fingers in the air forming the side’s sign of a V with their hands. 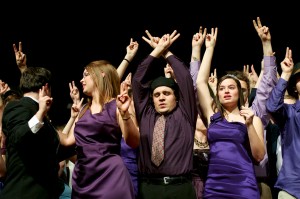 Purple students keep their side's sign of a V up in the air after Patrick Talley announced the Gold side's victory. (Reporter Photo/Jon Goering) 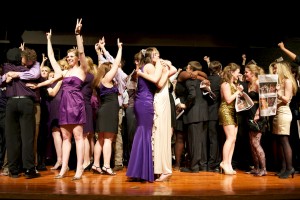 Gold and Purple team members react following the announcement of a Gold victory in this year's College Night at the University of Montevallo. (Reporter Photo/Jon Goering)

“I’m not sure how I feel,” said Meshae Robinson, Purple senior. “I’m very surprised. It’s still setting in. Purple victory is all I’ve ever known, but I’m happy for the Gold.”

Gold sophomore Brittany Smith played in the side’s orchestra and said it felt great to have her first Gold victory.

“It was amazing,” she said. “Both sides worked really hard and for us to finally win was so wonderful.”

The announcement of Gold’s victory followed the last showing of each side’s musical and theatrical productions. The judging of the show was counted among points each side earned throughout the following week in an assortment of intramural competitions.

This year, Gold’s production was entitled “A Tale of Two Wolves” and showcased a new perspective on several traditional fairy tales involving the Big Bad Wolf. 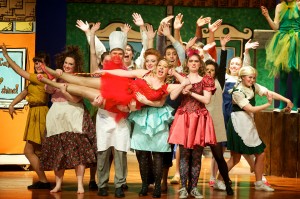 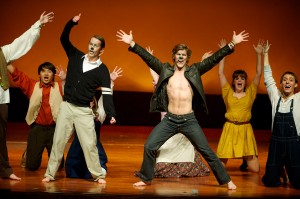 Their show starred the two sons of the big bad wolf, recently killed after his encounter with Little Red Riding Hood and her granny. The sons, played by Cody Webb and Richie Lisenby, attempt to flee the kingdom after gun-wielding Granny and Red Riding Hood organize an angry mob of villagers to eliminate all wolves.

The brothers’ escape is foiled by one’s increasing appetite for members of the village and they go separate ways after being torn between being good and being bad.

When the villagers capture one brother, the other heroically comes to his rescue and turns the mob against Granny — allowing them to escape and live in peace once again.

Smith said she believed the production’s originality is what secured the win for the Gold side this year.

“It was original and we put so much energy into it,” she said. “There weren’t any missing pieces.”

The living dead took to the stage during Purple’s production, “A Totally Zombie Musical.” 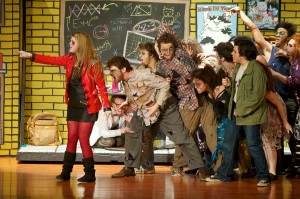 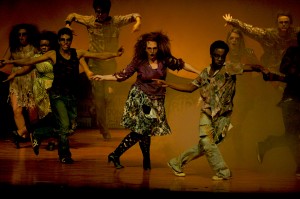 Zombies take the stage over during the Purple team's production. (Reporter Photo/Jon Goering)

In five scenes, their side told the story of an evil scientist who somewhat unwittingly created an army of zombies who infected others through dancing.

While the zombies take over a small college town, their queen, played by Mary Kate McLaurine, falls in love with the student trying to find the cure, played by Grant Bowen.

When he creates the antidote, the zombies are cured and he discovers that McLaurine’s character was never dead, allowing the two to be together.

Robinson said although her side didn’t win, she is still proud of the show they performed.

The university’s new president, Dr. John Stewart was in the audience during the productions for his first College Night. Though he remains neutral between the two sides, he said he was impressed by the talent showcased by all students involved.

“I heard so much about it I didn’t quite know what to expect,” he said. “What astonished me the most was the width and breadth of the talent on our campus. The measure of the talent on our campus is as rich as any small college in the country. You can go to any large or private university and you won’t find as rich of talent and tradition as this.”

At the end of the night, Smith said like the university’s combined colors, College Night can’t be about just Gold or just Purple.

“It feels amazing to win, but I have friends on the Purple side too,” she said. “So at the end of the day, I’m really part of both sides.” 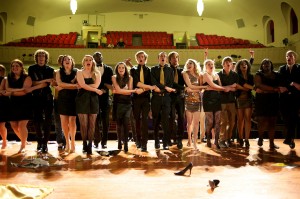 Even after most of the audience members had filed out of the auditorium following the show, Gold students continued the College Night traditions. (Reporter Photo/Jon Goering) 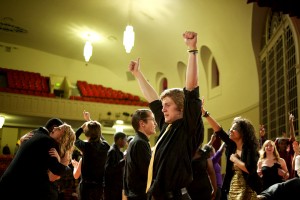 Backstage following the show, students from the Gold side celebrate, including the sons of the Big Bad Wolf, center. (Reporter Photo/Jon Goering)