Brittanie Mason, Alabaster, dances with Ellie, a student at the Linda Nolen Learning Center, during the Valentine's Day dance at the center on Feb. 14. (Reporter Photo/Jon Goering)

“The dance gives the kids a chance to interact with other students.” Boyd said. “We try to do things typical kids do as well. A lot of times, our kids get forgotten, especially if they were at a regular school.”

Jessica Lawson’s 8-year-old daughter Emily began attending the school in the fall, and Lawson beamed as she spoke of the impact on her daughter.

“They had a Christmas play where all of the kids had a part,” Lawson said. “Emily came here, and it’s been amazing here.”

Another Linda Nolen parent, Cori Jones, enrolled her son Cameron, age 7, only four months ago, but is pleased with the influence on her son. Cameron formerly attended a main-line public school.

“I took him out of public school and brought him here,” Jones said. “Typical kids are good for him, but it’s great to have him around other kids like him.

“It was great to have him in a Christmas play with other special-needs kids and not be the only parent with a special-needs child,” Jones said, wiping away a tear. “We didn’t even know there were other kids in wheelchairs until we came here.”

Parent Teacher Organization President April Mason attended the dance as well, and spoke of the positive results of the event.

“The dance brings the kids out, and it’s social interaction,” she said. “Not every kid can come in here, with the lights and loud music, it’d be too much for them.”

The Calera High School baseball team and Diamond Dolls, a student group, attended the dance to not only gain community service hours, but also to serve the kids with fun and socializing. 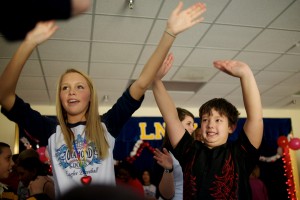 Eric Marsalis, a towering senior from Calera’s baseball team, lit up as he spoke of his participation in the Valentine’s Day dance.

“I think this is amazing; special-needs kids are amazing,” he said. “I’ve been wanting to get involved for awhile now, and I asked to get my name on the list.”

The Calera Diamond Dolls’ leader, Towana Posey, accompanied her students to the dance.

“We volunteered them to come dance with the kids,” Posey said. “They’re all changing their (future) majors because of being around these kids.”

Cameron J. and Amanda P. were crowned the dance’s king and queen, respectively, and they won the award for bringing in the most money for the dance’s penny drive. The princesses and princes are as follows: Kathryn L. and Colin G., for bringing in the second highest donation; Mariam A. and Luke B. from the multiple disabilities group and Emily L. and Justin R.