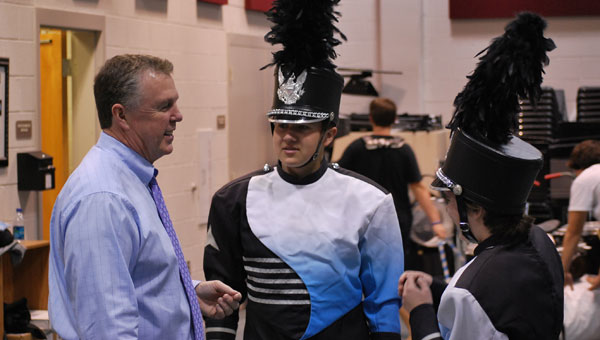 HOOVER — When Dr. Ken Jarnagin was named the Spain Park High School band director in 2010, he knew the band would soon have to get new uniforms.

“This is my first year here. When I came on board, we knew it was time to make a purchase,” he said. “Our uniforms here were 10 years old and served their life. It was time to move on.”

“We were going to have to look at planning and how we were going to make that purchase,” Jarnagin said. “Typically a band program would have to save money for many, many years. Sometimes bands must go into debt.”

While Jarnagin was puzzling over what to do, one of his color guard instructors found out about a school in Atlanta that had bought new band uniforms two years ago and had then bought new uniforms again recently.

“So we started looking at the old uniforms, knowing they had colors similar to our school colors at Spain Park,” he said. “When we looked at their uniforms online, we found out they had the exact same colors we did.”

Jarnagin contacted the band director at the Atlanta school and made a deal to buy 150 uniforms for $4,000 total. When the uniforms were new, they cost around $375 apiece, which would have put the cost of 150 uniforms at around $56,000, Jarnagin said.

“They had a very new, contemporary style that we liked. (The school) was just storing them over there, so they were in their way,” Jarnagin said. “We ended up buying them at a fraction of the cost of what we would normally have to spend.”

The band will first wear the uniforms at Spain Park’s first home football game of 2011. The band has paid off the $4,000 for the uniforms.

Shawn Mattie as Robert E. Lee stands frozen in his pose during the Living Wax Museum on Feb. 11 at... read more