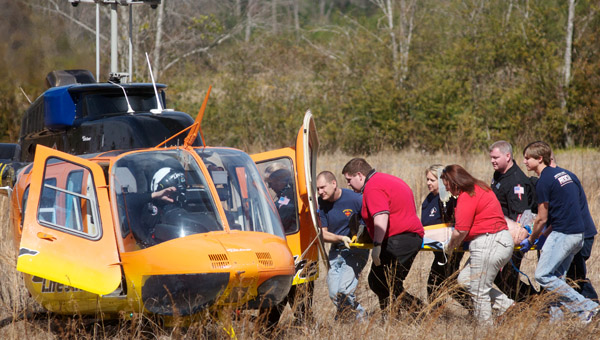 Emergency responders load Lane Ross, driver of a vehicle that was involved in a single car motor vehicle accident, into a Life Saver helicopter on Alabama 25 in Wilsonville on Feb. 15. (Reporter Photo/Jon Goering)

A Wilsonville man was airlifted to UAB Hospital on Feb. 15 after the vehicle he was driving wrecked on Alabama 25.

Emergency responders were notified of the single-vehicle crash about 11:30 a.m. It happened just past the intersection of Shelby County 48, or Blue Springs Road, just east of downtown Wilsonville. 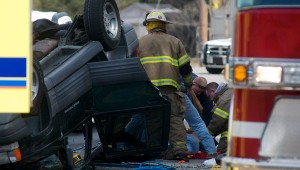 Medics tend to Lane Ross after firefighters with the Wilsonville Fire Department pulled him from his overturned vehicle on Alabama 25 on Feb. 15. (Reporter Photo/Jon Goering)

Traffic was diverted around the crash for about an hour as emergency workers removed Ross from the vehicle, Edwards said.