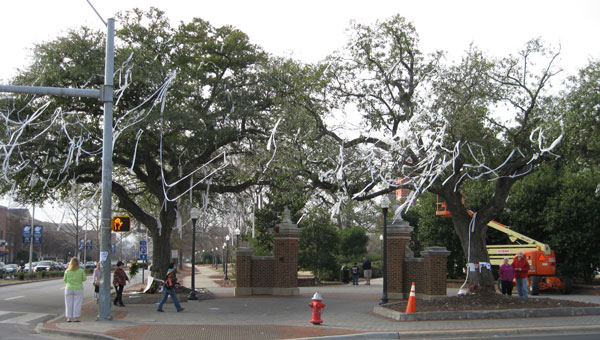 The Toomer's Corner oaks on Feb. 18. Dadeville resident Harvey Updyke has been charged with a felony count of criminal mischief for allegedly applying the Spike 80DF herbicide to the trees. (Contributed photo/Meg Beard)

Though they usually are bitter adversaries, local graduates of Auburn University and its biggest rival have found common ground in their condemnation of vandalism committed at Auburn’s historic Toomer’s Corner.

Shelby County’s southernmost point is about 80 miles north of the rolling plains of Auburn University, but the recent poisoning of the more than 130-year-old Toomer’s Corner tree had a strong impact on county graduates of both Auburn and the University of Alabama.

The Auburn Police Department arrested Dadeville resident Harvey Updyke on Feb. 17 and charged him with a felony count of criminal mischief for allegedly applying the Spike 80DF herbicide to the historic oak tree, which Auburn fans roll with toilet paper after significant sports victories.

“You can’t judge the fans or the schools with an act like that,” said Pelham Mayor Don Murphy, an Auburn graduate. “Nobody in their right mind would support that, no matter what school they went to.

“This guy (Updyke) is just a nut. Unfortunately, we’ve got a lot of nuts running around out there,” Murphy added. “But the tradition will go on.”

“It’s a very sad person who would do something like this. He’s got some severe issues if he did something like that,” Moseley said. “As a graduate of Alabama, you have a respect for Auburn.

“It’s fun when you have the back-and-forth between the two schools, but when someone takes it this far, it’s just incomprehensible,” Moseley added.

If Updyke is found guilty of the crime, he could be facing serious jail time, according to Shelby County Extension Coordinator Ricky Colquitt.

“I think it was a very childish and stupid thing to do,” said Colquitt, an Auburn graduate and current AU employee. “Now, the farmers and people who use that chemical in a lawful manner will have more restrictions placed on them.

“Several years ago, a guy in Texas used this same chemical to kill his neighbors’ trees, and he ended up spending nine years in a federal penitentiary,” Colquitt added. “It’s a federal offense to use this chemical in a manner inconsistent with its label.”

Because Spike 80DF does not pose a significant threat to humans, its sale is not restricted to those with a private or commercial applicator’s license, Colquitt said.

The chemical is often used by farmers and large companies to remove trees along fence lines, he said.

“All of the chemicals that are even acutely dangerous to humans are restricted to those with a private or commercial applicators license,” Colquitt said. “Spike 80DF inhibits the plant’s ability to make chlorophyll. It basically starves the plant to death.”

Elsewhere in Shelby County, other Auburn graduates said they have sentimental memories tied to the Toomer’s oaks.

County commissioner and Auburn grad Corley Ellis said if the tree dies, it would end one of his family traditions.

Ellis said the cross-state rivalry between Auburn and Alabama deserves more respect than the incident shows.

“It’s such a rivalry and it’s by far the greatest in the nation, and to tarnish that with an act like this is such a tragedy to me,” Ellis said. “Everybody that I’ve talked to, it seems like they’re mourning a loss. I’m convinced the Alabama fans that I know are just as sick about it as I am — well, maybe not quite as sick, but they’ll hate it. This guy is not a representative of our rivalry.”

Columbiana resident Buddy Kelly said he and his wife, both Auburn graduates, share a special memory of Toomer’s Corner: they got engaged under those oak trees. Now married three years and with a baby boy on the way, both are having a hard time coming to terms with the trees’ poisoning.

“I’m just sort of at a loss for words,” Kelly said. “I just can’t believe somebody would do something like that. It’s just a sport. Obviously, there’s a lot of crazy people in the world.”

Kelly’s wife couldn’t talk about the incident, either. Asked how she reacted to the news, Kelly said simply, “She cried.”