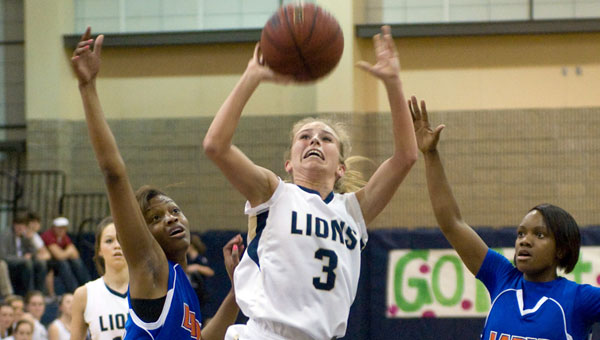 NORTH SHELBY — Briarwood Christian School junior Cara Medders fell awkwardly to the court in pain midway through the third quarter of the Lions’ game against Valley High School in the sub-region round of the Alabama High School Athletic Association Class 5A playoffs.

Medders, who bent her left index finger behind her palm, spent a few seconds writhing in pain underneath the Lions’ basket.

The durable guard showed no ill effects from the hyperextended finger as she drained 7-of-8 free throws in the final two minutes to help Briarwood Christian clinch a 43-40 win Feb. 17 over visiting Valley and seal a spot in the Class 5A Central Region tournament.

The Lions will face Fairfield in the Central Region semifinals Feb. 23 at 3 p.m. at the Dunn-Oliver Acadome on the Alabama State University campus in Montgomery.

“It means so much to us,” Medders said. “It felt like we won a state championship.”

Briarwood Christian will get the opportunity to continue playing for an AHSAA Class 5A title thanks to Medders’ clutch shooting at the charity stripe. Medders hit 8-of-10 free throws in the game and finished with 15 points.

The Lions finished 16-of-19 from the free-throw line. Valley converted only 5-of-13 free throws.

Senior forward Anna Handlin led the Lions (27-5) with 17 points on 7-of-17 field goals. Handlin, who grabbed seven rebounds, set a school record for rebounds in a single season during the sub-region contest and has a chance to surpass the 300-rebound mark before the end of the season.

“(Anna) has just got a nose for the ball,” Brown said.

Meredith Botes led the Lions with 13 rebounds in the victory.

The Lions jumped out to a 13-10 lead following a three-point play by Handlin with 11.6 seconds remaining in the opening quarter.

Medders drained a 3-pointer to complete a 6-0 run and give Briarwood Christian a 16-10 lead early in the second quarter. Following a basket by Valley, Cutcliffe hit two free throws to push the lead to 18-12 with 6:50 remaining in the first half.

Valley responded quickly with a 6-0 run to tie the game at 18-18 with 5:27 left in the second quarter. Cutcliffe drained two free throws with 17 seconds remaining in the opening half to give the Lions a 24-21 lead heading into the locker room at halftime.

Handlin led Briarwood Christian with nine points in the opening half.

Valley opened the second half with a 5-1 run to take a 26-25 lead with 5:33 left in the third quarter. It was the last lead the Rams held in the contest.

Handlin responded with a layup to put the Lions back in front. Miles entered the game temporarily for the injured Medders and hit 1-of-2 free throws to give the Lions a 28-26 lead. Miles scored a basket one minute later to give Briarwood Christian its largest lead of the third quarter at 30-26 with 1:30 left in the period.

Valley cut the Lions’ lead to 30-29 early in the fourth quarter before Briarwood Christian went on a 4-0 run, capped with a layup by Handlin, to take a 34-29 advantage with 5:17 remaining in the game.

Valley cut the lead to two points on three separate occasions in the final two minutes, but Medders kept the Rams at bay by hitting 7-of-8 free throws down the stretch.

Valley rebounded Medders’ lone miss in the final two minutes with 9.6 seconds remaining, but the Rams misfired on two attempts inside the paint to seal the win for the Lions.

Brown admitted he had his doubts about being able to return to a region tournament for the first time in five years at the beginning of the season.

Brown’s squad has made him a believer with area regular season and tournament titles along with a playoff victory on its resume. The Lions also set a school record for the most victories in a season since the school joined Class 5A competition before the start of the 2000-2001 season.

“This is, in a lot of ways, one of the most rewarding teams I’ve ever been around,” Brown said. “They just find ways to win games.”

University of Montevallo men's basketball coach Danny Young has the Falcons in line for another berth in the NCAA Division... read more