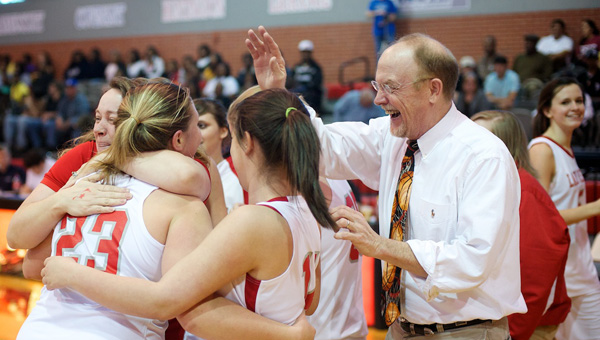 Smiley will forever be known as the senior on the Rebels’ first-ever state championship team in her sport following Coosa Valley’s 50-44 victory over Crenshaw Christian Academy in the Alabama Independent Schools Association Class 1A championship game Feb. 17 at Catherine Dixon Roland Arena on the Huntingdon College campus in Montgomery.

“I’ve been dreaming of this all season,” Smiley said. “It’s great. We’re going to be remembered for a long time.”

Smiley’s cousin, junior Lauren Archer, finished the season with a memorable performance as she led the Rebels (20-2) with 22 points and six rebounds on her way to most valuable player honors in the state championship game. 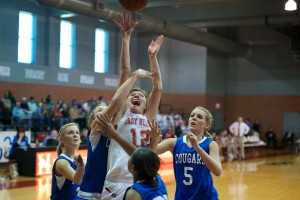 Coosa Valley's Lauren Archer puts up a shot and draws a foul in the middle of a pack of Crenshaw players during the first half of the game. (Reporter Photo/Jon Goering) 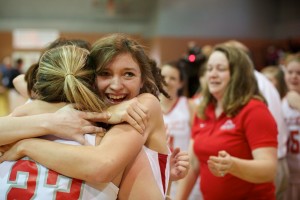 “Whenever I need for her to take over the basketball game, she does,” Rutledge said.

Archer, who has played with her cousin at Coosa Valley for the past six seasons, couldn’t dream of a better way to wrap up the season.

“It’s (Jordan’s) senior year and I’m glad we won it for her,” Archer said.

Smiley, who made the AISA Class 1A all-tournament team, added six points and a team-high 10 rebounds in her final game.

Rutledge said Smiley asked to speak with the team before he addressed the Rebels in advance of the AISA Class 1A championship game.

“I’m going to find out what she said,” Rutledge said, “because we came out ready to play.” 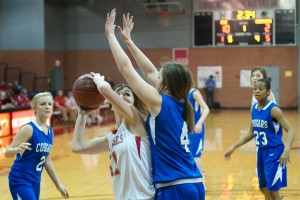 Coosa Valley's Jordan Smiley tries to get a shot to the basket under heavy pressure from Crenshaw's Jasmine Wise. (Reporter Photo/Jon Goering)

Freshman Kaylan Rich, who was also named to the AISA Class 1A all-tournament team, contributed 11 points, four rebounds and three assists in the victory.

“Kaylan evolved so much this season,” Rutledge said. “It’s like having another junior or senior out there.”

Rutledge praised Ripley for controlling the pace of the game from her point guard position.

“We couldn’t get the ball up and down the court without her,” Rutledge said.

Coosa Valley opened the game with a 12-2 run, capped with a layup by Rich with 2:06 remaining in the opening quarter, to take a commanding lead early.

Crenshaw Christian closed the first quarter with a 7-0 run and cut the Rebels’ lead to 12-11 early in the second quarter. Coosa Valley responded with a 6-0 run and pushed its lead back to 18-11 with a layup by Smiley with 4:49 left in the first half. 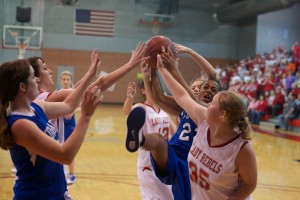 The Cougars and the Rebels battle for a rebound during the first half. (Reporter Photo/Jon Goering)

Crenshaw Christian cut the lead to three points late in the first half before Baker found Sprayberry open underneath the basket with 13.2 seconds remaining in the first half to give the Rebels a 26-20 lead heading into the locker room at halftime.

Crenshaw Christian opened the second half with a 3-pointer to cut the Rebels’ lead to three points before Coosa Valley slowly expanded its lead. Rich drained a jumper with 2:49 remaining in the third quarter to give the Rebels a 36-29 lead entering the fourth quarter.

Ripley swished a 3-pointer to open the fourth quarter, which pushed the Rebels’ lead to double digits for the first time in the second half.

Crenshaw Christian rallied to cut the Coosa Valley lead to 47-44 following a floater in the lane by Qulia Robinson, who led the Cougars with a game-high 32 points, with 36.2 seconds remaining.

The Rebels beat the defensive pressure on their next possession and Rich converted a three-point play with 18.8 seconds left to clinch the title for Coosa Valley.

Coosa Valley missed its first six free throw attempts in the fourth quarter to allow Crenshaw Christian to make a comeback, but Rutledge praised Rich for taking the ball to the basket and sealing the victory in the championship game. 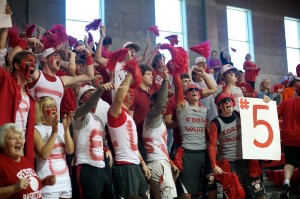 The Coosa Valley student section goes wild after a bucket-and-a-foul by the Rebels late in the fourth quarter of the game. (Reporter Photo/Jon Goering)

“I tried to stall, but it slows us down on both ends of the court,” Rutledge said. “I called a timeout and told the girls to forget about it. I told them ‘Let’s go to the goal.’ That’s what we did.”

Rutledge, who led the Rebels to their first championship in his ninth season as head coach, said it was satisfying to finally win an AISA Class 1A title.

“I’ve been here so many times,” Rutledge said. “We could never get over the hump in the Final Four. We came ready to play today.”

Rutledge praised Coosa Valley assistant Amy Archer, who he said led many team practices during the season when he was running late.

“I couldn’t do it without her,” Rutledge said. 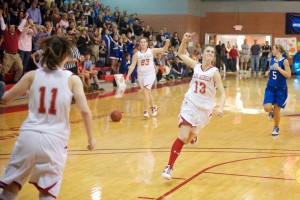 Coosa Valley's Samantha Baker (13) hold up a number one as time runs out on the clock, sealing a state championship for the Rebels. (Reporter Photo/Jon Goering) 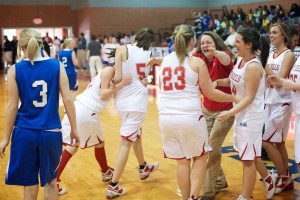