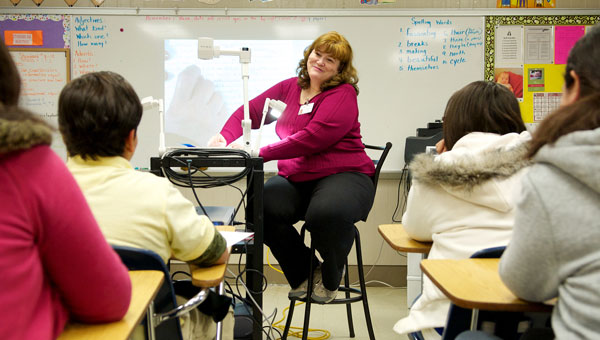 When any child who speaks a language other than English enters the Shelby County school system, Leah Dobbs Black goes to work.

Black, the English as a Second Language supervisor for Shelby County Schools, said the ESL program seeks to help such students pick up English and grade-appropriate academics at the same time.

“Right about 10 percent of students speak a language other than English,” Black said.

Of those 3,000 students, the language most predominately spoken is Spanish, she said.

“We have 60 languages represented in our school district. Spanish is the most dominant of those languages,” Black said. “We have about 2,500 students who are native Spanish speakers.”

Black said when students register with Shelby County Schools, school officials must verify those students do live in the school district. However, it is against the law for school officials to ask to see a student’s documentation or to ask a family to prove they are in the country legally.

Black said one of the ESL program’s most important jobs is providing support for Spanish-speaking families. Important documents, such as the student code of conduct and enrollment forms, are available in Spanish.

There are many areas where the school system must improve, she said. For example, school officials are checking into ways to make the system website more accessible for Spanish-speakers.

“Under federal mandate, we’re obligated to make our best-faith effort to communicate with parents in a language they understand,” Black said.

Sometimes Spanish-speaking parents – just like parents from any other culture – must learn how to work with the school system.

“We have a high expectation of parents in America when it comes to school involvement. In other parts of the world, when you send your child to school, you entrust them to the people at school. There are very little expectations of parents,” Black said. “Sometimes we think parents don’t want to be engaged, but it’s not in their experience for parents to be expected to take an active role.”

Jackie Ritchie, who teaches the Learning English And Parenting Skills class at Meadow View Elementary in Alabaster, is trying to help such parents transition into their roles as mothers with children in the Shelby County school system.

On Feb. 10, close to 20 Hispanic women sat in one of the portable classrooms behind Meadow View for Ritchie’s LEAPS class. All were mothers of elementary, intermediate, middle or high school students.

“You can imagine how hard it would be to be in a foreign country, learning the language and needing to help your child,” Ritchie said.

Lesmen Casillas, a 15-year Shelby County resident originally from Aguascalientes, Mexico, wrote in an assignment she wants to learn English so she can better provide for her children.

“My goals for my children are, consider the university to have a better job and overcome as a person,” Casillas wrote.

Hilda Garcia, who is originally from San Miguel el Alto Jalisco, Mexico but has lived in Shelby County for 7 years, wrote she has big goals for herself as well as her children.

“My goals are learn more English and learn the customs, and be famous painter or work with plants,” she wrote.

Ritchie said the parents she works with want to be independent, even in a different culture. Those parents don’t expect to be catered to, she said.

There are LEAPS classes available in Pelham, Alabaster and Inverness. On Thursdays, parents in the LEAPS classes go into classrooms for 30 minutes at a time to observe teachers, Ritchie said.

“This is an exceptionally good school, and I wouldn’t say that if it were not true, at working with all people,” she said. “They can ask a question here they might be afraid to ask somewhere else. It’s OK to make mistakes in here. I called a Supreme Court justice ‘old bones’ a few weeks ago in Spanish.”

At the memory, every parent in the classroom laughed.

Ritchie said parents are invaluable to making sure their children have a strong educational foundation.

“We tell them the mothers are the first teachers,” she said.

Black echoed Ritchie’s comments, saying that she encourages Spanish-speaking parents to continue to communicate with their children at home, even while their children are learning English.

“If you ask a family not to communicate in their native language, then you’re not just changing how they speak,” she said. “You could be limiting their ability to communicate with each other.”

During the school day, students are immersed in English, Black said.

However, the school system is seeing results.

“Typically, we’re seeing if a student starts with us in kindergarten, by the time they leave fifth grade they no longer need ESL,” Black said.