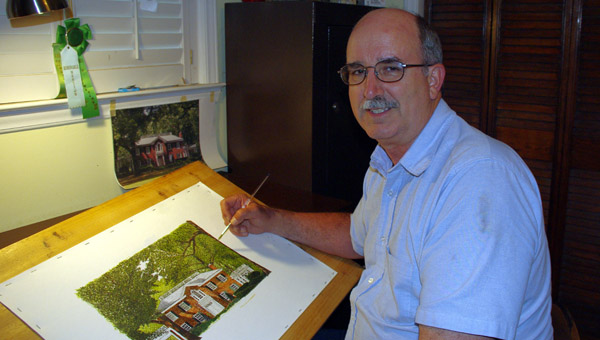 Michael Joe Moore, who grew up in Columbiana, works at his studio inside his North Carolina home. (Photo contributed)

His artwork has evolved tremendously since the early days, when he got his start redrawing comics as a student at the old Columbiana grammar school.

Now, he creates watercolor paintings, mostly focusing on small town and historical sites, including the Shelby County Courthouse, the Columbiana Leader, Toomer’s Corner and Bryant-Denny Stadium, to name a few. 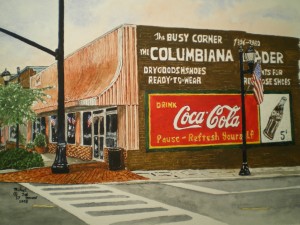 His work is featured in several art galleries in Alabama and North Carolina, as well as in several foundry publications and calendars.

If a site has historical significance, chances are Moore would like to paint it.

“I’ve always loved history,” Moore said. “I would have been a history major, but I couldn’t figure out how to make a living with history.”

Moore, a self-taught artist, said he didn’t get serious about his artwork until he was about 26 or 27 years old. He worked with oils and did primarily wildlife paintings.

His artwork, though, eventually took a backseat to raising a family.

Moore took a job in North Carolina and worked 60 hours a week, in addition to raising two kids with his wife, Debbie.

At about age 36, Moore put down his brushes and quit painting. He wouldn’t paint again for another 15 years.

“I kept wanting to,” he said, “but it was just a matter of not having enough time.”

His son, Brad, is getting married in May. His daughter, Stacey, is married and expecting a child in April.

Four and half year ago, once his kids were grown, Moore decided it was time to paint again – with a twist.

Instead of painting with oils, Moore made the switch to watercolors. Moore said he switched for time reasons. He said it took 30 minutes to clean his brushes with oil paints, compared to about 30 seconds to clean with watercolors.

Moore turned his son’s old room into a studio. He wakes up every weekday at 3:30 a.m., gets dressed and paints until 5:30 a.m., when he leaves for his day job. He’s the foundry manager for J.C. Steele and Sons, which makes brick machinery.

If he beats his wife home from work, he’ll paint some then. He paints on the weekends and any time he can find a few spare minutes.

“I always have something that I’m working on,” he said.

Moore works on one painting at a time and never starts a new one until he’s done with the old one. He works from photographs of his subjects and considers himself a “fairly organized” artist.

In 2010, he completed 51 paintings. Forty-one of those were sold. Four were donated for fundraising purposes. The majority are sold in stores, others by word of mouth. It usually takes 12-15 hours to complete one painting, he said. 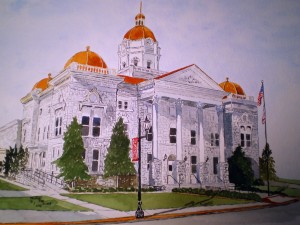 Earlier this month, at Shelby County’s 193rd birthday celebration, a painting of the Shelby County Courthouse he did was presented to Alabama Gov. Robert Bentley. Bryant Art Gallery donated the frame for the painting, which was presented to the governor by the Greater Shelby Chamber of Commerce.

Currently, one of Moore’s paintings of Toomer’s Corner is helping to raise money to save the live oaks after it was recently announced they had been poisoned.

On Oct. 3, 2010, the day after Auburn beat Louisiana-Monroe 52-3, Moore went to Auburn and took several photos of the trees, rolled with toilet paper in celebration.

Working from the photographs, as he always does, Moore painted the scene and called his creation “After the Win.” 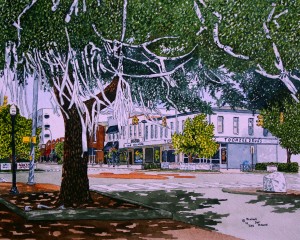 On Feb. 18, Moore and Bama Fever, Inc. Team Fever in the Shelby Mart Shopping Center in Pelham decided to sell t-shirts with the painting printed on them. One dollar of each sale will be donated to the “Toomer’s Trees and Traditions Fund.”

“I’m an Alabama fan, but I respect the tradition of any school,” Moore said. “That was a great tradition they had.”

Moore has done several paintings from sites in Columbiana. Prints and postcards of those, as well as Auburn and Alabama, are available at Davis Drugs in Columbiana.

Locally, his work also can be found at Bryant Art Gallery, located at 5361 U.S. 280, and The Blue Phrog Gallery in Montevallo, located at 955 Main Street. More of Moore’s work can be viewed at his website at watercolorsmjm.com.

Moore is available for fundraising work or commission paintings from the Shelby County area. Anybody interested should contact Starr Largin, Moore’s sister, at 541-2127.