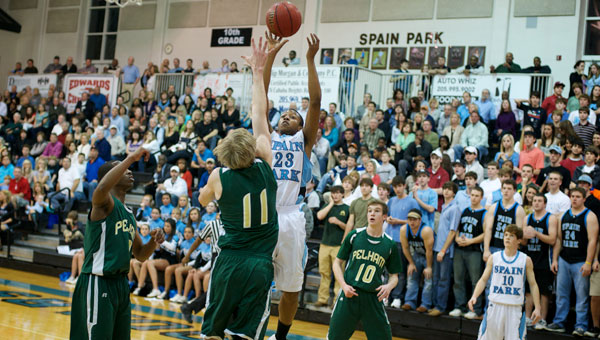 Moon’s Jaguars survived a tough Pelham squad and advanced to the AHSAA Class 6A Northeast Region tournament. Spain Park, which enters the region tournament with a six-game winning streak, will face Gadsden City in the Northeast Region semifinals Feb. 22 at 10:30 a.m. at Pete Mathews Coliseum on the Jacksonville State University campus.

Moon, who said the Panthers disrupted the Jaguars’ offense more than any team his squad faced all season, thought his players were fatigued by the Panthers ability to shut down open passing lanes. Pelham, which finished with 24 turnovers, forced Spain Park to turn the ball over 14 times, which sped up the tempo of the game.

“It was a weird game,” Moon said. “We looked a little tired. Nobody’s frustrated us like that this year. Our ball skills were not very good and (Pelham) had a lot do with it.”

Robby Prater led the Jaguars (24-8) with 17 points on 4-of-6 shooting from the floor, including a 2-of-3 performance from beyond the arc. Prater also finished 7-of-8 from the free-throw line with all seven of his points at the charity stripe in the final 1:09 to ice the game for the Jaguars.

Tanner Rice led Pelham (10-17) with 11 points on 5-of-6 shooting from the floor. Rice, who grabbed a team-high seven rebounds, struggled at the free-throw line as he hit only 1-of-4 attempts from the charity stripe.

The Panthers finished 6-of-12 from the free-throw line in the loss. 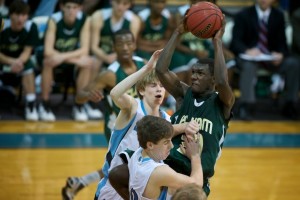 The Panthers forced a couple of turnovers early in the game and jumped out to an 11-5 lead following a layup by Reilly with 5:25 remaining in the opening quarter. Spain Park responded by closing the opening period with a 13-2 run, capped with a 3-pointer by Stone at the buzzer, and carried an 18-13 lead into the second quarter.

The Jaguars extended the run to 17-2 early in the second quarter following an offensive rebound and basket by Hedden with 4:12 left in the first half to give Spain Park a 22-13 lead. Prater drained a 3-pointer with 2:35 remaining in the first half to give the Jaguars their first double-digit lead at 25-15. Rash threw down a two-handed jam with 2:18 remaining in the second quarter to cut the Jaguars’ lead to 25-17 heading into the locker room at halftime.

The Jaguars regained the momentum early in the fourth quarter and pushed their lead to 38-32 following a layup by Close with 3:21 remaining in the contest.

Slane drained a 3-pointer with 2:26 left in the game to cut the Jaguars’ lead to 38-35, but the Panthers couldn’t get any closer as the Jaguars hit 8-of-10 attempts from the charity stripe down the stretch.

Pelham coach Joel Floyd said the Panthers were able to jump out to an early lead due to their carefree attitude entering their first sub-region game in more than a decade.

“We talked about just having fun and enjoying the experience,” Floyd said. “We wanted to go out and live up the moment. We came out loose.”

Floyd said he wasn’t surprised to see the senior-laden Panthers hang around with Spain Park in the second half.

“All year long we have found a way to battle back,” Floyd said. “These seniors laid the foundation for the future. I couldn’t be more proud of them.”

The Jaguars are back in the AHSAA Class 6A Northeast Region tournament for the first time since a run to the Final Four during the 2006-2007 season.

Moon said Spain Park will need to play much better than it did in the sub-region game for the Jaguars to have a chance to return to the Final Four.

“We’ve got to play a lot better,” Moon said. “We’ve got to take better care of the ball or we’re going to get blown out.”