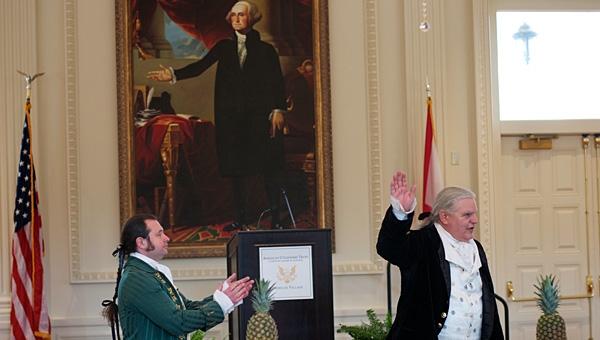 George Washington waves goodbye to the crowd as Patrick Henry applauds at the end of the George Washington Birthday and President's Day Convocation at American Village. (Reporter Photo/Jon Goering)

The American Village’s new board chair, Vaughan Morrissette, welcomed the crowd of well-dressed attendees with a quote from the eulogy of the country’s first president.

“George Washington was first in war, first in peace and first in the heart of his countrymen,” Morrissette said.

“Principles taught here are foundational to our nation’s wellbeing,” Mickelson said of the American Village. “You are setting the pace for the entire nation in this important work.”

Ivey began her keynote speech sharing the testimony left by Washington and his predecessors.

“The early leaders didn’t have late night news or focus groups,” Ivey said. “They went on their gut. They did what they thought was right.”

She proceeded to tell the attentive group they had a duty beyond the “typical” citizen.

“Your duty as a citizen does not end at the ballot box,” she said. “It must continue.”

Ivey encouraged the attendees to make an effort to call their elected officials often in order to keep the officials accountable.

“Don’t wait for the next four years to let your frustrations out,” Ivey said. “I encourage you, patriots, citizen leaders, be an engaged electorate. The door to the lieutenant governor’s office is always open. It’s a new day in Alabama, and I’m thrilled to be a part of it.”