CALERA – Students at Calera High School received a first-hand account of the state’s civil rights struggle Feb. 22 from an Alabama journalist who covered the turmoil.

Wayne Greenhaw, author of “Fighting the Devil in Dixie: How Civil Rights Activists Took on the Ku Klux Klan in Alabama,” spoke to students for 20 minutes in the auditorium as part of the school’s black history month events.

“The fights, the battles in the courtrooms and on the streets of Alabama that these people fought back in those days are still affecting you and affecting your world,” Greenhaw told the students. 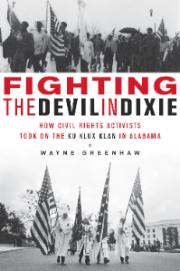 Prior to Greenhaw’s speech, the Calera’s advanced choral program performed a song about Harriett Tubman, the former slave who helped run the Underground Railroad.

Calera Principal Richard Bishop said the event was a great learning experience for all students.

“I think it brings to life maybe the stories they’ve heard from their grandparents, whether they’re a minority or not,” Bishop said, referring to the civil rights era. “It’s an appreciation for all cultures. We’re about diversity in our school, and I think that’s the biggest thing we gained from it today.”

The school tries to bring as many Alabama authors to campus as possible, Bishop said.

“It was a great opportunity to tie in black history month and bring in a local author to our school,” he said.

“Fighting the Devil in Dixie” is Greenhaw’s 22nd book and is available in the school’s media center.

Greenhaw, an Alabama native who studied creative writing at the University of Alabama, focused much of his speech on the case of Willie Edwards Jr.

Edwards was a black man who, on Jan. 23, 1957, was abducted and killed by Klansmen. His “crime”: flirting with a white woman, the Klansmen alleged.

The Klansmen pulled Edwards from the Winn Dixie truck he was driving, beat him with a pistol, abducted him and then forced him to jump into the Alabama River from the Tyler-Goodwin Bridge.

“That was one of the cases that struck me as I studied them through the years,” Greenhaw said.

Greenhaw spoke briefly about Charles Morgan Jr., the civil rights leader and former head of the American Civil Liberties Union. Citing a chapter from his book, Greenhaw called Morgan “the Don Quixote of the South.”

“That’s what he was,” Greenhaw told the students. “He was a legal Don Quixote, out fighting legal windmills.”