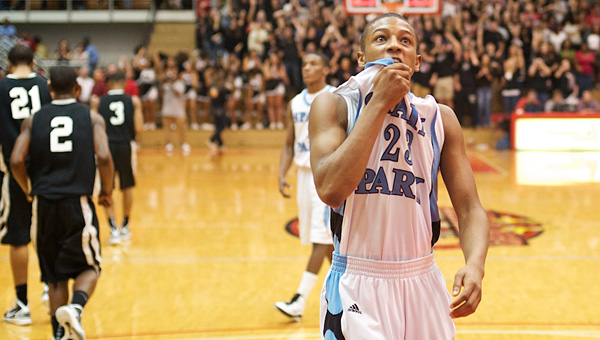 Spain Park's Steven Lawson looks up as the clock runs out, sealing the victory for Gadsden City over the Jaguars in the regional semifinal game in Jacksonville, Ala. (Reporter Photo/Jon Goering)

The Jaguars, who had an uncharacteristic 14 turnovers against Pelham in a Class 6A sub-region contest last week, fell victim to heavy pressure by Gadsden City guards in the region tournament loss. Spain Park turned the ball over 23 times against Titans, which led to 22 points for Gadsen City in the Jaguars’ first trip back to the Northeast Region tournament in five years.

“(Gadsden City’s) matchup and zone caused us some trouble,” Moon said. “They disrupted us more so than anybody has all year.” 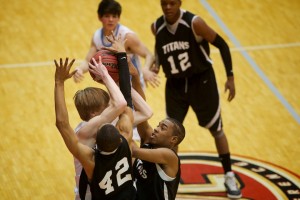 Spain Park's Frank Hedden gets hounded by a pair of Gadsden City defenders during the 6A regional semifinal game in Jacksonville, Ala., on Feb. 22. (Reporter Photo/Jon Goering)

Junior guard Rembert Martin, who led the Jaguars (24-9) with a game-high 15 points, said the Gadsden City guards made running the offense difficult.

“It might have just been there pressure and their quickness,” Martin said. 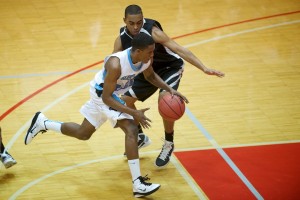 Martin finished 5-of-16 from the field, including 3-of-10 from beyond the arc, and grabbed six rebounds. Robby Prater added 12 points on 5-of-11 shooting, including 2-of-6 from 3-point range. Mitchell Holt, who grabbed seven rebounds, contributed 10 points on 4-of-9 shooting from the floor.

Alex Close chipped in four points and five rebounds. Steven Lawson, who finished 1-of-5 from the floor and 1-of-4 from 3-point range, finished with three points. Lawson also grabbed a team-high eight rebounds and dished out a team-high three assists. Blake Dudchock finished with two points. 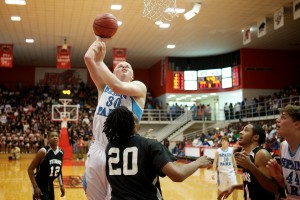 Spain Park's Alex Close puts up a shot over Gadsden City's Xzavier Taylor during the secold half. (Reporter Photo/Jon Goering)

Spain Park, which shot only 28 percent from beyond the arc and finished 1-of-9 from 3-point range in the opening half, never led in the game.

Holt, Dudchock and Martin each scored a basket early to tie the game at 6-6 with 3:57 remaining in the opening quarter. The Jaguars trailed for the remainder of the contest.

Gadsden City closed the first quarter with an 8-2 run to take a 14-8 lead into the second quarter. 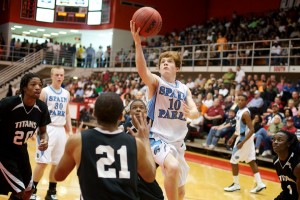 Spain Park's Robby Prater puts up floater over the Gadsden City defense during the second half of the game Feb. 22. (Reporter Photo/Jon Goering)

Martin drained a 3-pointer with 1:14 left in the first half to cut the lead back to single digits temporarily at 26-17 before the Titans carried a 29-19 lead into the locker room at halftime.

Spain Park responded with a 17-8 run to cut the lead to 47-40 with 2:08 remaining in the game. Martin drained two 3-pointers, Holt drained one long-range shot and Prater swished a teardrop floater during the run. Holt hit 1-of-2 free throws to cap the run and give the Jaguars’ large student section behind its basket a surge of energy in the final minutes. 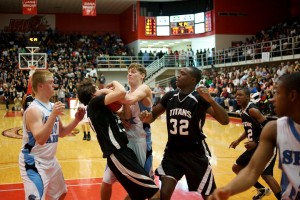 However, the Titans responded with a 6-0 run with a couple of easy baskets off Spain Park turnovers to put the game out of reach.

Gadsden City coach Reginald Huff said the Titans had a difficult time putting the game away against the Jaguars.

“We got a little shaky,” Huff said, “but we were playing a good team.”

Holt said the Jaguars didn’t have their best showing against Gadsden City.

“I think we could have won the game,” Holt said. “We didn’t play like we play and that’s why we lost.”

Holt praised the Spain Park students for their vocal support during the Northeast Region tournament semifinal. Spain Park used several buses to transport a few hundred students to and from Jacksonville.

“Getting everybody out of school is awesome,” Holt said. “We had a great student section.” 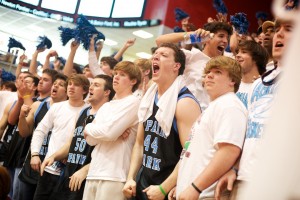 The Spain Park student section tries to will a comeback during the second half. (Reporter Photo/Jon Goering)

Moon said returning to the region tournament is a source of pride for the Jaguars.

“It’s always tough to get here,” Moon said. “You have to be lucky as well as good.”