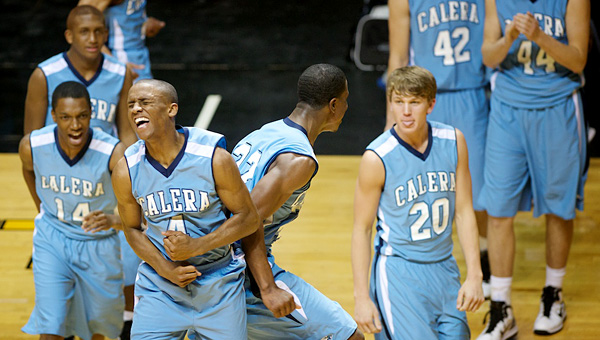 Calera's Deondre Haynes (4) and Ronnie Clark (22) celebrate with their teammates following their victory over Dadeville in the 4A Boys Regional Semifinal game on Feb. 23 in Montgomery. (Reporter Photo/Jon Goering)

Calera’s win at the Dunn-Oliver Acadome on the Alabama State University campus advances the Eagles (23-9) to the region final Feb. 25 at 3 p.m. against Midfield, a double-overtime winner against Dallas County.

Against Dadeville (21-6), Jeremy Hyde made a 3-pointer with 5:52 left in the game to give Calera a 61-58 lead – its first lead since the Eagles led 10-8 early in the first quarter. Calera would not trail again.

Freshman guard Ronnie Clark scored 16 of his game-high 27 points in the first half for Calera, which needed Clark to drive to the basket and attack the rim. 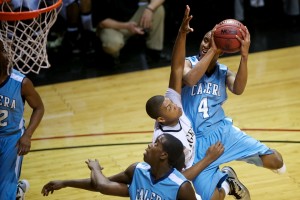 Calera's Deondre Haynes (4) takes contact from a Dadeville defender while trying to get a shot off during the first half. (Reporter Photo/Jon Goering) 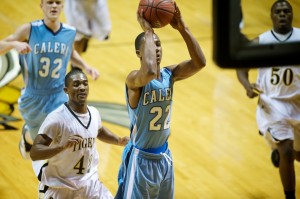 “I kid him all the time,” Calera coach Robert Burdette said of Clark, who finished with eight rebounds. “I tell him he’s dating the jump shot a lot but he’s not going to the prom yet. They went out a couple of times today, but he takes that ball and drives it to the goal – that’s what we wanted to do. We didn’t want to come in here and shoot a bunch of jump shots.”

“We rebounded the ball and we attacked the goal,” Burdette said. “Those are two of the things we wanted to do.”

In the first quarter, Dadeville led by four points three different times. It took a six-point lead with two minutes left on a one-handed breakaway dunk by Terry Toler.

“We kept our composure and we kept calm,” Clark said. “We didn’t rush jump shots.” 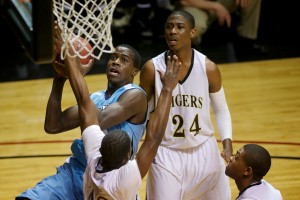 Calera's Titus Adams takes the ball hard to the rim during the first half of the game. (Reporter Photo/Jon Goering) 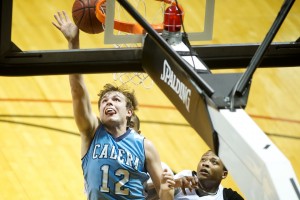 Calera's Jeremy Hyde goes up for the ball over the top of a Dadeville player during Wednesday's game. (Reporter Photo/Jon Goering) 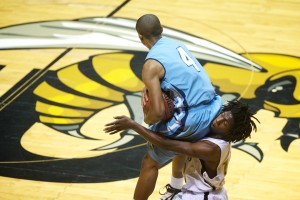 Calera's Deondre Haynes secures a pass under heavy pressure from Dadeville's Deshawn Redden during the second half of the game. (Reporter Photo/Jon Goering)

Calera tied the game 42-42 three minutes into the third quarter on a 3-pointer by Clark but couldn’t take the lead.

Hyde, who finished with 21 points, scored seven consecutive points for Calera during one stretch in the third quarter, including  3 of 6 free throws in a 47-second span. 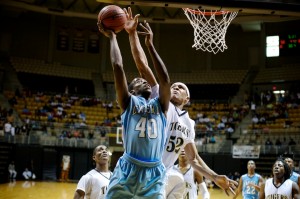 Calera's Titus Adams (40) tries to get a shot past Dadeville's Darrion Hutcherson (52) during the second half of the game. (Reporter Photo/Jon Goering) 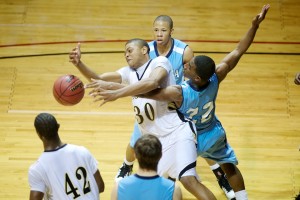 Calera's Ronnie Clark (22) battles Dadeville's Ladarius Wilkerson (30) for a rebound during the second half of the game. (Reporter Photo/Jon Goering)

“He played really big for us,” Burdette said of Hyde. “He played about four different positions on the floor today.”

Calera’s Deondre Haynes was fouled on a 3-point attempt with six seconds left in the third quarter. The junior guard made all three free throws and finished with 16 points.

“That was a big play in the game,” Burdette said of Haynes’ free throws, which cut Calera’s deficit to 56-55 entering the fourth quarter.

After Hyde’s 3-pointer to give Calera the lead early in the fourth quarter, the Eagles never trailed again.

Calera made 2 of 6 free throws in the final 20 seconds.

“A fourth battle with Midfield looms on the horizon,” Burdette said, looking ahead to the region final.

“We want revenge,” Clark said. “We’re going to be ready.”