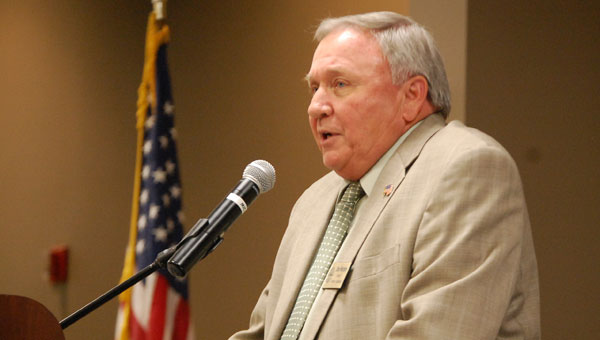 The down economy is still negatively impacting Shelby County’s municipalities, but housing and commercial growth is slowly returning, the county’s mayors said during the annual mayors luncheon Feb. 23 at the Pelham Civic Complex.

The luncheon was hosted by the Greater Shelby County Chamber of Commerce, and featured speeches by mayors from 12 of the county’s municipalities.

Many of the mayors shared their thoughts on the state of the economy and praised Shelby County for its quality of life and the magnitude of its offerings.

Helena is currently in the process of negotiating the purchase of a piece of property to use for a new Helena high school, and its sales tax revenues are rebounding, according to Mayor Sonny Penhale.

“We are in line to get a new high school, and are negotiating a property right now,” Penhale said. “Things are looking better. Sales taxes are picking up again.

“As soon as building gets back up, we will be doing all right,” Penhale added.

Westover Mayor Mark McLaughlin said his city has more than doubled in size over the past five years, and recently moved from town to city status.

“We are 10 years old this year. In the last five years, we have grown in population from 900 to about 2,200,” McLaughlin said, noting the city has expanded from 2.5 square miles to 22 square miles and has added 20 part-time employees during the same time.

“I am proud to announce that we are now the city of Westover, not the town of Westover,” McLaughlin added.

Alabaster Mayor David Frings shared a realistic view of his city, and said Alabaster has seen a recent influx in new mid-size and small businesses.

“These are hard times. I’m not going to tell you everything is perfect in Alabaster, but I can tell you our glass is more than half-full,” Frings said. “On the retail front, we’ve seen somewhat of a comeback, mostly in small- and medium-sized businesses.

Indian Springs Mayor Steve Zerkis said his town is thriving under limited government, and is benefiting from the county’s services.

“We don’t believe in a lot of government. We do zoning, but we have no sales or property tax,” Zerkis said. “We have some excellent county services, like the Sheriff’s Office and the county planning department.”

Sales tax revenues in Columbiana currently are above what the city projected, according to Mayor Allan Lowe.

“Our sales tax revenues are up past what we projected,” Lowe said, shortly after joking with the other mayors. “And we’ve got some new businesses coming in.”

Calera Mayor Jon Graham said he and his staff are working hard to keep up with the city’s explosive population growth.

“We recorded 170 new home permits last year, which was only down 10 from the previous year,” Graham said, noting he was happy the Shelby County School District is looking to purchase the former Shelby Academy property to use for a new Calera school. “We are striving to improve our services to keep up with the growth.”

Hoover Mayor Tony Petelos said he is happy his city is in Shelby and Jefferson counties, and announced the city’s Ross Bridge was recently named the best community in the country.

Montevallo Mayor Ben McCrory said his city has finished the past two years with a surplus budget to add to its reserves.

“When they finalize the census this year, we think we will go to 8,000 (residents),” McCrory said, noting Montevallo had fewer than 5,000 residents a few years ago. “We recently got a $10,000 grant to research buildings in downtown Montevallo.”

Harpersville Mayor Theoangelo Perkins drew laughs when he called his city “Happyville,” and said he was excited Budweiser is preparing to move its distribution center to the city.

“We are clapping our hands about Budweiser. They are bringing some new jobs,” Perkins said. “If happy cows come from California, happy people come from Shelby County and Harpersville.”

Vincent Mayor Ray McAllister said his city is preparing to welcome the new White Rock quarry, and is operating with a balanced budget.

“White Rock has made a lot of commitments to us,” McAllister said. “They are in the process of putting in the most modern equipment in the quarry business.

“The good thing about it is that we will get 125 new jobs,” McAllister added.

“There will be a savings of $7, $8 to $10 a month for residents,” Niven said, noting Chelsea recently signed a contract with Advanced Disposal to provide the city’s garbage service.

“We have a lot of commercial growth going on,” Niven added. “Our housing is down, but we are still growing.”

“The previous mayor and City Council left the city in good financial shape,” Murphy said. “In Pelham, we care about one another, and we love one another. I’m glad I have the honor to be the mayor of Pelham, Alabama.”