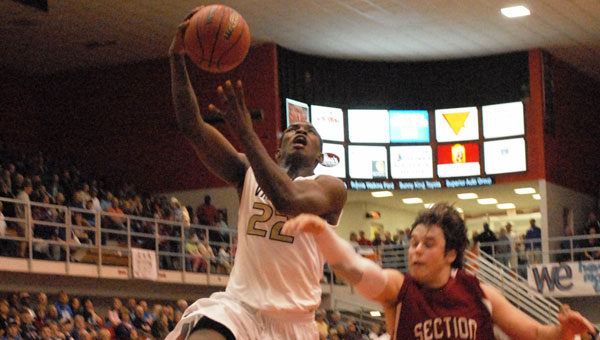 JACKSONVILLE — Vincent High School boys’ basketball coach John Hadder didn’t act like a coach that just led his school to a win in an Alabama High School Athletic Association Class 2A region tournament for the first time in seven years following the Yellow Jackets’ 68-61 win over Section in a Class 2A Northeast Region semifinal contest Feb. 23.

Hadder’s team had just avenged a 59-56 loss to Section in the Northeast Region semifinals a year ago and snapped a two-game region tournament losing streak, but he knew his guys were too good to simply settle for a region tournament victory. Vincent players and coaches are focused on much bigger tasks on the horizon, including a battle with Sand Rock in the AHSAA Class 2A Northeast Region championship game Feb. 26 at 10:45 a.m. at Pete Mathews Coliseum on the Jacksonville State University campus.

“We’ve had a tough time getting through the first game,” Hadder said. “This year our guys feel like it is our time.”

Moon led the top-ranked Yellow Jackets (25-6) with a game-high 24 points. Moon, who shot only 9-of-21 from the floor, drained 5-of-8 attempts from beyond the arc and swished a 3-pointer at the end of each the second quarter and third quarter to give Vincent a boost against Section. Moon also grabbed nine rebounds.

“Dontravious kept us afloat,” Hadder said. “He shot the ball about as well as he has all year.”

Moon said Hadder told him to remain confident in his shooting ability with Section focused on post players Bruce Hamilton and Keyon Wallace, which opened things up on the perimeter. 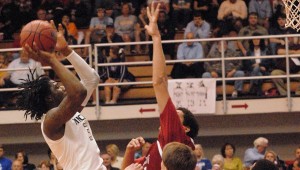 Vincent High School forward Keyon Wallace puts up a shot against Section in the Yellow Jackets' 68-61 win over the Lions in the AHSAA Class 2A Northeast Region tournament semifinals Feb. 23. (Contributed/Kristi Ingram)

Vincent opened the game with a 6-0 run to take an early lead following a 3-pointer by Moon with 4:34 remaining in the opening quarter.

Section responded with an 11-2 run to take a 11-8 lead with 1:28 left in the first quarter. Back-to-back layups by Hamilton and Wallace at the end of the first period gave the Yellow Jackets a 12-11 lead entering the second quarter.

Section tied the game with a free throw in the first minute of the second quarter and led by as many as three points with just more than four minutes left in the opening half.

Two free throws by Wallace and a floater in the lane by Hamilton gave the Yellow Jackets a 21-20 lead with 3:15 left in the opening half. Section scored consecutive baskets to take a 24-21 lead late in the half before two 3-pointers by Moon and a layup by Rogers in the final two minutes of the second quarter gave Vincent a 29-26 lead heading into the locker room at halftime. Moon’s 3-pointer at the buzzer sent the Yellow Jackets into the locker room with momentum after a back-and-forth battle in the first 16 minutes.

Moon, who drained three 3-pointers in the opening half, led the Yellow Jackets with 12 points at the break.

Vincent held a slim lead throughout the first six minutes of the third quarter before Section drained a 3-pointer with 2:05 left in the period to take a 42-41 lead.

The Yellow Jackets responded with a 14-0 run during the next four minutes to take a commanding double-digit lead. The run included two 3-pointers by Moon — one at the buzzer to end the third quarter and another deep bomb to cap the run and give the Yellow Jackets a 55-42 lead with 6:50 remaining in the game.

Section nailed two 3-pointers late in the fourth quarter to cut the Yellow Jackets’ lead to 64-60 with 1:18 remaining. However, Rogers responded with a layup and McKinney grabbed an offensive rebound and scored a basket to keep Section from turning the contest into a one-possession game in the final minute.

Hadder said Vincent struggled with nerves in the opening quarter much like the Yellow Jackets did in their previous two trips to Jacksonville. However, this time his players settled in and remained focused on getting its first region tournament win since the 2002-2003 season.

“In the past we might have folded…but our guys stood in there until the end,” Hadder said. “After we settled in, we executed really well in the halfcourt.”