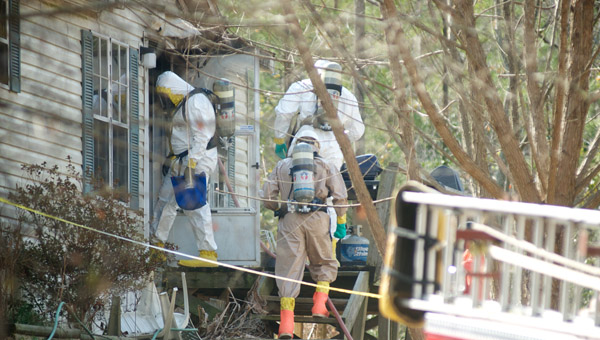 The Shelby County Hazardous Material Response team works to identify meth-making related chemicals after this residence on the 11000 block of Shelby County Road 17 caught fire Feb. 18. Three people were arrested. The next day, on Feb. 19, a separate, unrelated meth lab was discovered at a home on Shelby Drive. (Reporter Photo/Jon Goering)

Five people have been charged with unlawful manufacturing of a controlled substance following two separate but unrelated methamphetamine lab busts Feb. 18-19, according to the Shelby County Sheriff’s Office.

Three were arrested following a meth-lab related fire on Shelby County Road 17, and two were arrested after someone alerted authorities to what appeared to be remnants of meth lab on Shelby Drive.

The first bust was Feb. 18, when the sheriff’s office was called to the 11000 block of Shelby County Road 17 to investigate a house fire. With help from area fire departments, authorities determined the fire might have been related to chemicals located at the scene.

Two people inside the home when the fire started were transported to local hospitals for fire-related injuries. A third person fled the scene before deputies arrived. 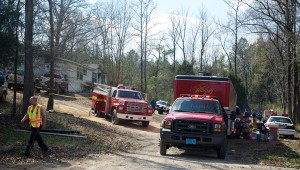 Law enforcement authorities and emergency responders work to determine the cause of the fire. (Reporter Photo/Jon Goering)

Three people were arrested following the investigation: Tracey Edward Boothe, 41, and Jerime Wayne Dunnaway, 39, both of Montevallo, and Tommy Rodger Carden, 45, of Alabaster were all charged with first degree unlawful manufacturing of a controlled substance.

Boothe and Dunnaway are being held in the Shelby County Jail in lieu of $500,000 bond each.

On Feb. 19, the day after the house fire, the drug task force responded to the 5000 block of Shelby Drive, located in the Southern Pines neighborhood, after an individual discovered what appeared to remnants of a meth lab. Investigators determined meth was being produced there.

Arrested were Crystal Rena Ginn, 21, of Gadsden, and Brandon Lynn Mullinax, 25, of Scottsboro. Both were charged with unlawful manufacturing of a controlled substance and are being held in the Marshall County Jail on unrelated charges.

Ginn and Mullinax will be extradited to Shelby County upon release from Marshall County, where both are being held on $5,000 bond each for two charges each: manufacturing meth and possession of meth, according to an online inmate database maintained by the Marshall County Sheriff’s Office.

“We educate, offer treatment and make arrests, but this addiction is strong,” George said.

FROM STAFF REPORTS HOOVER — A Jefferson State Community College instructor recently picked up a prestigious honor when she was... read more