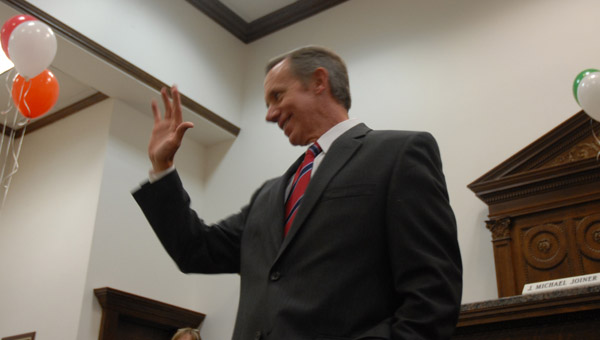 Judge Michael Joiner, who served on the Circuit Court for 18 years, was honored Feb. 25, his last day on the job before starting his new position Feb. 28 on the state's Court of Criminal Appeals. (Reporter photo/BRAD GASKINS)

It was Joiner’s last day on the job after serving for 18 years.

Joiner begins serving the Alabama Court of Criminal Appeals on Feb. 28 in Montgomery.

“I have tried in these 18 years to be a judge who rendered justice in a fair and impartial manner, and tried to treat the litigants in a way that I would want to be treated,” Joiner said.

At the end of the reception, at precisely 2:50 p.m., Joiner raised his right hand and placed his left on a Bible. He was then ceremonially sworn-in to the state’s Court of Criminal Appeals by Ret. Associate Justice Patti Smith.

Joiner will be formally sworn-in at a later date in Montgomery, he said. 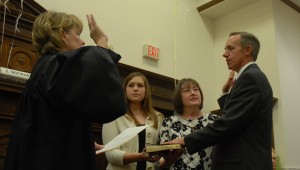 With wife Cathy and daughter Christy by his side, Judge Michael Joiner (right) is ceremonially sworn-in to the state's Court of Criminal Appeals by Ret. Associate Justice Patti Smith. (Reporter photo/BRAD GASKINS)

“Mike started out a very, very good person from very good parents, and he lived up to that,” said Judge Hewitt “Sonny” Conwill, who replaced Joiner as the Circuit Court’s presiding judge. “We’re all here to congratulate him on what he’s done and also for what he’s about to do.”

Shelby County Commission Chairman Corley Ellis presented Joiner with a resolution honoring him for his years of service to the county.

“I’m excited to be here on this occasion, though I’m not excited about losing you. We’re excited about the possibilities for you,” Ellis said. “We know you will do great things at the state level like you have here.” 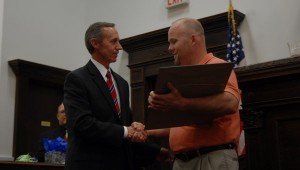 When the bar learned Joiner was leaving, it sent e-mails to lawyers throughout the county to collect money for a parting gift.

“You wouldn’t believe the contributions that came pouring in,” Hutcheson said.

The lawyers gave Joiner, who enjoys running and golfing, a $1,000 gift certificate to Dick’s Sporting Goods.

“I will accept this contingent upon the approval of the ethics commission,” Joiner said, adding that if not then he will refer the gift back to the Bar to donate to a charity of its choice. 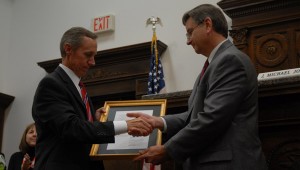 District Attorney Robby Owens spoke next and praised Joiner for his fairness.

“It always makes it sad when somebody like that is leaving,” Owens added. “I wish you well.” 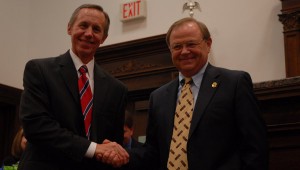 “What can we give the judge from the D.A.’s office, if you will, that would be appropriate since he’s basically going to be in his new position reviewing our work?” Bostick said. “The giant, inflatable ‘affirmed’ stamp we thought might be a little inappropriate, so we found something else.”

Courtesy of the Shelby County Historical Society, Bostick then presented Joiner a plaque with one of only two existing pieces of marble slab used in 1954 to construct a new addition to the existing courthouse.

“If I can be so bold, I’d like to present this plaque to you, because in some ways it’s symbolic of you,” Bostick said. “On the outside, it’s smooth and polished, but on the inside it is firm and it is strong, and it is the foundation on which great things are built and have been built.” 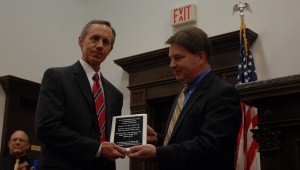 “The praise and the kind words exceed anything that is deserved,” Joiner told those in attendance. 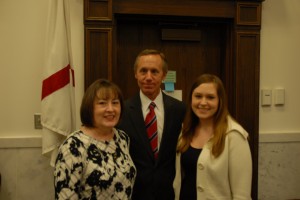 “I was raised in a way that I didn’t have to come to the bench to learn work ethic and a standard of integrity,” Judge Joiner said. “I learned that from an early age.”

Joiner chocked up as he began to speak of his parents’ influence in his life. He paused for a moment to collect his thoughts.

“There’s not a man in this world I respect more than my father,” Joiner said. “He has always earned that respect, and the same is true of my mother. I never doubted their full love and devotion and support.”

Calera's Deondre Haynes looks to get a shot around the outstretched arms of a Midfield defender during the regional finals... read more