The untold story of ‘Dolly Dog’ 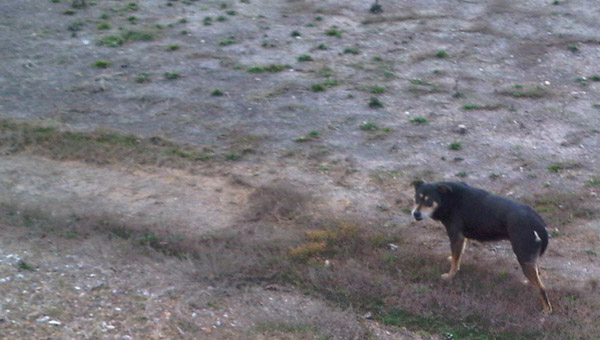 'Dolly Dog' has wandered about along Alabama 70 for at least the last three years. This rare photo of her was taken Feb. 24. (Submitted/CARLA SMITH)

CALERA – For the last three years, a feral female dog has wandered alone around the Waterford subdivision and Kensington Manor apartments on Alabama 70.

Self-described animal lovers Buddy and Carla Smith said they are determined to capture, rehabilitate and provide a loving home for the dog.

“We will never know her history, but we want to write her future,” Carla Smith said.

Chris Smith, no relation to Buddy and Carla Smith, has spent countless hours pursuing the dog to no avail.

“It’s tough trying to track her down. She can disappear on you pretty quick,” Chris Smith said. “I think she actually recognizes animal control vehicles and police vehicles.”

Drivers who frequently travel along Alabama 70 may have seen the dog walking or running alongside the road, always at a safe distance from passing vehicles. It’s as if the dog knows the rules of the road.

“She’s better at a four-way stop than most people are,” Carla Smith said.

The dog has been spotted on numerous occasions patiently waiting for traffic to pass, looking both ways before cautiously crossing the road.

It’s hard to pin down exactly when the dog first arrived on the scene. Chris Smith knows only that it’s been at least three years. Few people saw the dog those first two years. A passing motorist might have caught a rare glimpse every now and then.

For the last year, though, the reclusive dog has emerged from hiding and is now a visible yet solitary fixture in the area.

Chris Smith said he suspects several people began feeding the dog, and she became accustomed to the steady diet and had a reason to come around more frequently.

“It’s just slowly over the past year that she’s had a steady pattern,” Chris Smith said.

Strays normally don’t have names, but this dog is no Jane Doe. Buddy and Carla Smith decided to name her Dolly Dog.

Buddy and Carla, who live in the Waterford subdivision, are volunteers at the Shelby County Humane Society. It’s not in their nature, they said, to think of Dolly Dog as a stray.

“Those bitter cold days and nights tormented us, wondering if she was cold or wet or if she had a dry place to rest,” Buddy said. “We decided then that we would do all we could to befriend this beautiful black and tan girl.”

While Buddy and Carla made plans to befriend Dolly, Chris Smith was scheming ways to capture the dog for Buddy and Carla. His trigger fingers were tied, though.

Chris Smith could have shot Dolly long ago with a tranquilizer gun. There were too many risks involved with that approach, perhaps the most risky being passing traffic, which a disoriented Dolly easily could have staggered into.

Chris Smith went back to the drawing board. He said he knew he’d have to outfox the savvy, street-smart Dolly Dog.

Chasing Dolly down was never an option. It would have been futile. It didn’t help Chris Smith’s cause that he frequently tracked Dolly with a truck full of other animals. She could smell him coming. Dolly could see, too.

“She will see a large truck like mine and stop and wait on it to leave before she travels, making sure she’s not followed,” Chris Smith said.

Dolly’s escape routes are numerous – wooded areas, pathways and trails, some known only to her.

So Chris Smith set a trap. He put food inside it. If Dolly entered to retrieve the food, a latch mechanism would trigger the cage door to slam shut, ensnaring Dolly for the first time in her life.

Meanwhile, Buddy and Carla Smith were trying a different approach. Like Chris Smith, they also studied Dolly’s patterns, observed her daily routines and attempted to predict her next move.

“She likes high places where she can survey her domain,” Buddy said.

Day after day Buddy and Carla watched and waited on Dolly. They wanted her to know she was among friends. Then they made a significant discovery: Dolly Dog preferred women more than men. From then on, Carla took the lead in establishing a rapport.

Buddy and Carla put out leftovers for Dolly before eventually getting Dolly her own food bowl and filling it daily with her own dog food, always left in her favorite spot. Their plan to befriend Dolly right through the front door of their house seemed more promising than ever.

“Day after day we were there, morning and evening, with food,” Carla said.

Dolly waited by her bowl one cold and rainy day for Carla to approach and fill it with food. Dolly then ate the food right in front of her.

“She was so grateful and you could just tell that she was cold and wanted so badly to trust us,” Carla said.

But living her entire life on the lam made that hard to do.

After eating, Dolly would move to her favorite resting place, curl up with her back to the wind and enjoy whatever sunshine she could get. Carla and Buddy were on the verge of bringing Dolly into their home.

On Feb. 19, Carla went to sit with Dolly but kept her distance.

“She watched me closely and even came up one level to see if I had treats,” Carla said. “Then she settled down to rest and enjoy the day as well. We did nothing out of her routine and she began to have more trust in Buddy and I.”

Meanwhile, several miles away, Chris Smith was plotting his next move to capture Dolly Dog.

A couple weeks earlier he’d been scheming with several animal control officers from Shelby County, batting around ideas on how to catch Dolly. Finally, Chris Smith had the answer: lace Dolly Dog’s food with a sedative.

Working together, Chris Smith, Carla and Buddy put their final plan into motion. The final trap was set. Convinced Dolly Dog was in their grasps, they proceeded with the plan Feb. 22.

The sedative was put into two McDonald’s sausage biscuits, which Dolly quickly consumed. A few moments passed, and Dolly began to stagger – the plan was working!

Dolly then lay down about four yards from Carla. When the moment was right, Carla was to place a collar with a leash around Dolly’s neck. Another 10 minutes for the sedative to completely take hold, and the feral dog would finally have a loving home.

Carla clutched the collar in her hand, waiting for her moment. The time was at hand.

Then, suddenly and seemingly from out of nowhere, another woman appeared. She had in the past occasionally left food out for Dolly and quickly approached the sedated dog just to say hello.

Dolly Dog, heavily sedated but surging with adrenaline, bolted away.

A three-hour search ensued. The sedative had worn off well before the search was called off. They erred on the side of caution just to make sure Dolly hadn’t staggered onto the highway. Dolly was fine but back on the run.

“Buddy and I want to make this girl a fine home, give her the love and care she needs and take her from the savage highway that has cost so many animals’ lives,” Carla said.

It didn’t happen this day, which, as it turned out completely by coincidence, was National Spay and Neuter day.

It was a frustrating setback for a couple that devotes so much of their lives to better the lives of animal.

The day after Dolly escaped was Carla’s birthday. She returned home Feb. 23 after a steak dinner with family and spotted Dolly Dog in the distance, clearly more skittish than in those days before the botched capture.

Carla put out some leftovers for Dolly, which she ate.

Now, Chris Smith, Carla and Buddy are scheming to capture Dolly Dog once again. Most likely, they said, they’ll try the same trick again, hopefully with a different outcome.

Carla said she has no ill-feelings towards the woman who unknowingly ruined the capture. But Carla’s already taking precautions to make sure it doesn’t happen next time. She made up several signs on poster board, reading: