Heartbreak for Vincent in final game 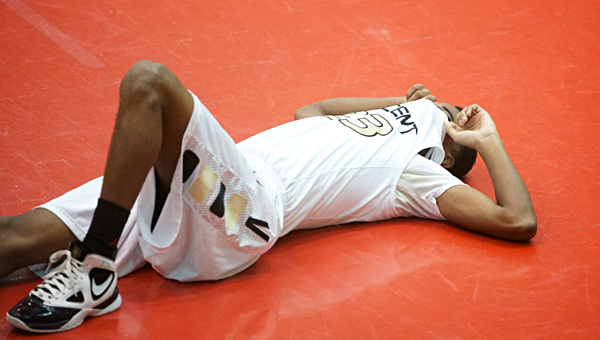 Vincent's Dontravious Moon (23) reacts to the team's loss against Sand Rock in the regional finals on Feb. 26 in Jacksonville. (Reporter Photo/Jon Goering)

“‘If they’re going to beat us, let’s make them beat us,'” Hadder demanded.

Vincent rose to the occasion and turned the halftime deficit into a two-point lead with 12.6 seconds remaining, but Sand Rock also answered the challenge with a game-winning 3-pointer with 7.1 seconds left to hand the Yellow Jackets a disheartening 60-59 loss at the Pete Mathews Coliseum on the Jacksonville State University campus in the school’s first region tournament championship game appearance in seven years.

“We got after it and played as hard as we could play (in the second half),” Hadder said. “They made shots when they needed to make shots.”

Dontravious Moon led Vincent (25-7) with 17 points on 5-of-11 field goals, including 3-of-5 from beyond the arc, and draned all four of his free-throw attempts. 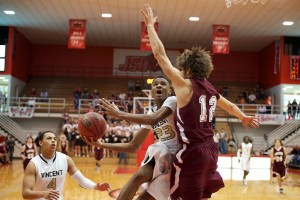 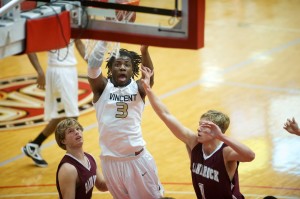 Keyon Wallace scored 16 points on 8-of-10 shooting from the floor in the final game of his high school career. Wallace also grabbed seven rebounds, blocked six shots and dished out four assists.

Moon and Wallace were each named to the AHSAA Class 2A Northeast Region all-tournament team.

Anterio Rogers chipped in 10 points, three rebounds and two assists. Ben McKinney finished with two points and two steals in his final game. Austin Davis grabbed one rebound off the bench for the Yellow Jackets.

Sand Rock led for the majority of the first half on its way to a 33-24 halftime lead.

Rogers scored the game’s opening basket to give Vincent an early 2-0 lead. Moon’s 3-pointer with 2:56 left in the opening quarter gave the Yellow Jackets a 9-8 lead, which was their only other advantage in the first period.

Moon’s offensive rebound and putback with 4:20 left in the first half gave Vincent a 22-21 lead. A layup by Wallace with 3:34 remaining in the second quarter gave the Yellow Jackets their final lead in the opening half at 24-23 after Sand Rock closed the half with a 10-0 run.

Moon led Vincent with 10 points in the first half. 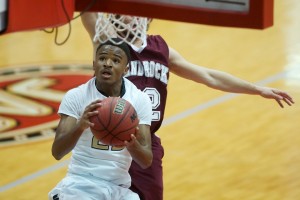 Vincent's Dontravious Moon (23) ducks under a Sand Rock defender on his way to the basket. (Reporter Photo/Jon Goering) 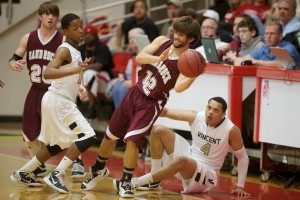 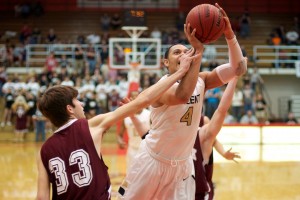 The Yellow Jackets rallied early in the third quarter to tie the game at 36-36 following a three-point play by Hamilton, which capped a 12-3 run to start the second half, with 4:36 remaining in the period.

Sand Rock went on a 5-0 run late in the third quarter to take a 45-41 advantage heading into the fourth quarter.

Vincent followed up the Sand Rock run with a 11-3 run in the final minutes and took a two-point lead at 59-57 following two free throws by Moon with 12.6 left in the game.

Matt Graham sent the Yellow Jackets home unhappy after draining a 3-pointer from the left wing with 7.1 seconds left in the game.

Wallace got off one final attempt from just inside midcourt, but his deep shot bounced off the front of the rim.

Wallace said the loss will sting for a while, but he’ll look back on his career at Vincent with pride after helping his school win its first region tournament game in its third consecutive trip to Jacksonville over the past three years.

“I’m angry about losing, of course, but we got over the hump,” Wallace said. “I’m proud of that but still upset about the loss.”

“We didn’t get a lot of easy baskets,” Hadder said. “They made us earn every basket in the frontcourt.” 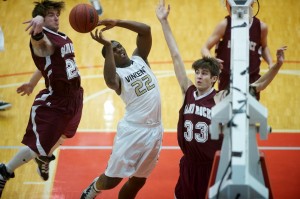 Vincent's Ben McKinney tries to get to the basket under pressure from Sand Rock's Justin Kyser (25) and Brian Mackey (33). (Reporter Photo/Jon Goering) 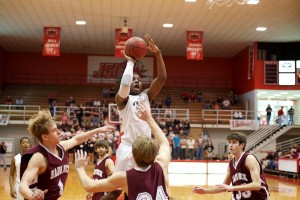 Hadder also said a lack of experience played a role in the region tournament championship game. Sand Rock won its third consecutive AHSAA Class 2A Northeast Region championship, while the Yellow Jackets were playing in their first title game in Jacksonville.