Patrick has been following the progress of the garbage company bids, and visited Mayor Earl Niven to ask about the process, Patrick’s dad, Paul, said before the city council meeting. 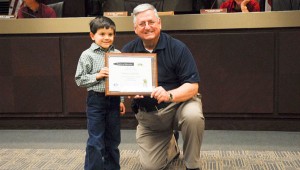 “He fell in love with garbage trucks,” Paul Hnizdil said. “While other kids are playing video games, Patrick is watching YouTube videos of garbage trucks.

“He knows our garbage man, Chris Knight, personally. Patrick will even bring him lunch,” Paul added. “Garbage day is his day.”

Niven decided to reward Patrick for his dedication by giving him a certificate announcing Patrick as honorary chairman.

“You may be the first 6-year-old to receive what I’m going to give you,” Niven told Patrick. “I’m calling you when I have trouble with the garbage people and let you straighten them out.”

In other news, the council:

-Has received eight resumes for the open seat in the city council. On March 21, the council will interview potential candidates, and will make a recommendation during the council meeting March 22.

-Accepted a resolution to grant an off-premises retail beer and retail table wine alcohol license to the Publix located at 501 Chelsea Crossroads.

-Accepted a $2,800 bid from George Painting to paint the exterior of The Crane House Library. Cost includes paint and labor.

-Declared the month of April 2011 as “Child Abuse Prevention Month” in the City of Chelsea.

University of Montevallo junior guard Ryan Westbrooks drives to the basket in the Falcons' 74-68 win over Georgia College and... read more