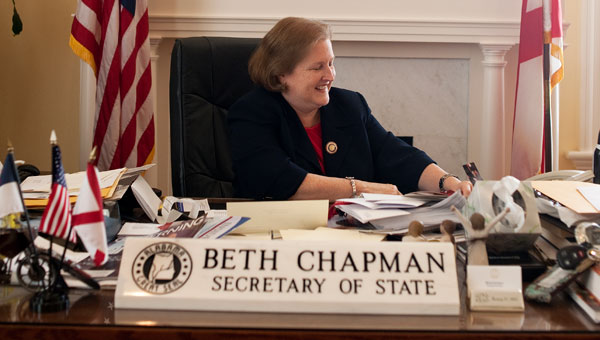 Alabama Secretary of State Beth Chapman lets out a laugh while on a conference call in her office on Nov. 22. (Reporter Photo/Jon Goering)

By DAVIS POTTER / For the Reporter

Maybe it was the desire to help out her paraplegic cousin as a child growing up in Greenville, Ala.

Perhaps it was milling around after school inside the Butler County Courthouse, where her mother worked in the tax assessor’s office.

It could have been her infatuation, as a sixth-grader, with the Watergate scandal that broke in the early 1970s.

That affection has carried over into her adult life and has led to her position as the Alabama Secretary of State.

Chapman, who has held the position since 2006, recently began serving her second term after receiving 63 percent of the state’s votes to defeat Democratic opponent Scott Gilliland in the Nov. 2 election.

“I’ve been blessed and fortunate to get an additional four years to do what I really love doing,” Chapman said. “Administration is my gift, and this is the job that I love.”

Local residents were emphatic with their support of Chapman, as she received nearly 50,000 votes within the county.

“Shelby County is a county of highly educated people who are very politically involved in their community,” she said. “It honors me that they do vote for me and have always consistently voted for me in very high numbers. They won’t support you if they don’t think that you’re right for the job. It’s very humbling.”

Before running for Secretary of State, Chapman served as State Auditor for one term.

When elections rolled around in November 2006, Chapman was ready to challenge herself. Problems within the leadership of the Secretary of State’s office prompted a run at the job.

“I genuinely am a fixer,” she said. “I like to take bad situations and make them better. I like to see what I’m doing – where it was, where we’ve brought it and where we can take it. I love a challenge, and I saw so many things that needed to be corrected. It was the perfect opportunity.”

Chief among her concerns are military voting and the presentation of photo identification for voters – both when registering and at the polls – in order to prevent voter fraud.

“When I ran (for Secretary of State), I said, ‘No more dead people voting in Alabama,'” she said.

Absentee ballots have also been part of the problem, Chapman said.

“How can we write effective laws that will better manage the use and abuse of absentee ballots?” she said. “There’s going to need to be jail time. It’s got to be stopped. There’s got to be tougher penalties, and not just a $50 fine.”

Chapman got her feet wet in politics in the early 1990s as a 32-year-old appointment secretary for the campaign of former Alabama Gov. Fob James, who was shooting for his second term.

“(James) just saw that I was organized, and that I was a get-it-done, mover-and-shaker type young person,” Chapman said.

Before working for James, Chapman spent 10 years as the state executive director for the Alabama chapter of the Cystic Fibrosis Foundation, where she said her business skills and conservative beliefs blended.

“With nonprofit, you have nothing to work with,” Chapman said. “Nobody knows better how to make something from nothing than a nonprofit person. It was a perfect fit for me.”

Chapman received her undergraduate degree in communications from the University of Montevallo, where she was a Student Government Association officer, the leader of College Night and a member of the Alpha Gamma Delta sorority.

She also completed her master’s degree in education at the University of Alabama in Birmingham in 1990.

Her involvement in college activities began putting her political ideas into motion.

“You learn different levels of responsibility,” Chapman said. “That structure was excellent for me. College Night, SGA and Alpha Gam sorority are as much responsible for my civic activities and for continuing and realizing the importance of the principles and the values that just small-town America gave me.”

Chapman has spent her adult life living in Hoover and the northern part of Shelby County with her husband, James, and their two sons, Winston Taylor and William Thatcher, who were named after former British Prime Ministers Winston Churchill and Margaret Thatcher.

Much like the residents of Shelby County, Chapman said her husband’s endorsement has been overwhelming.

“Any political person who tells you their spouse does not have input is lying to you,” Chapman said. “Who better to run something past that you’re thinking about and who better to have as a sounding board than your husband or your spouse? He’s always there, he always listens and he’s very patient.”

Although Chapman is a self-proclaimed “workaholic,” she has understood the importance of a balanced life.

She said her free time is spent watching movies, taking trips to the beach and writing, as evidenced by three books she has written.

She can also entertain a crowd, drawing from her weekends performing stand-up comedy routines at various venues in Alabama, Florida and Georgia for a brief time after college.

“It was just something I did for fun. I like to have a good time,” Chapman said. “People who work with me cannot believe I have a sense of humor. I can take anything and make it funny – sometimes in a very dry sense.”

Humor, she said, is an important part of relating to the people she comes in contact with daily.

“It’s important to remain grounded,” Chapman said. “People don’t want someone they can’t talk to or relate to. People want people to represent them who are like them.”

With the position being term-limited, this will be Chapman’s final four years as the Secretary of State.

Chapman said she is unsure of what life after politics will hold. She may later entertain the thought of running for a higher office if given the opportunity.

“I’m never going to close the door, but God’s going to have to open one really, really wide for me to want to go through it,” she said.

The future, though, can wait. Chapman is focused on the task at hand.