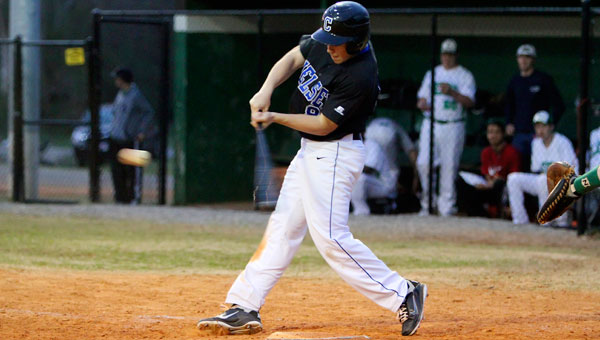 Chelsea High School junior Eli Bashour swings at a pitch in a game against Leeds in a doubleheader March 2. (Contributed/Cari Dean)

Eli Bashour led Chelsea at the plate as he finished 2-for-4 with an RBI.

Jake Campbell took the loss on the mound after giving up five runs, including three earned runs, on three hits with 11 strikeouts and a walk in 6 2/3 innings.

Reliever Davis Shoemaker gave up one run on one hit before recording the final out.

Chelsea pounded Leeds 17-1 after racking up 14 hits in the nightcap.

Joey Mock led the Hornets at the plate as he finished 3-for-4 with two doubles, an RBI and a run scored.

Campbell went 2-for-3 with a double, two RBIs and two runs scored. Davis Shoemaker finished 2-for-2 with a double and three RBIs. Carey Emmerke went 2-for-4 with a triple and a double. Emmerke drove in two runs and scored two runs.

Emmerke picked up the win on the mound after giving up one unearned run on five hits with five strikeouts and three walks in four innings. Jackson Hyde didn’t allow a hit and struck out one batter in one inning in relief.