PROFILE: Climbing her way to the top 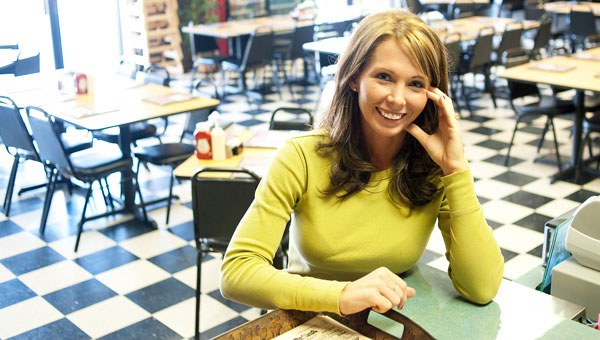 At age 14, the thoughts that filled Miranda Carter’s mind weren’t those of the typical teenage girl.

She wasn’t hanging around after school with friends, going to the mall or cheering on her hometown sports teams.

Instead, after school, she would strike out walking to her job at Johnny Ray’s in Pelham.

Since that young age, Carter’s mind has been all business.

The 2002 graduate of Pelham High School is driven, and at only 26, she’s well on her way to accomplishing her personal goal of owning three businesses by the age of 30.

But it didn’t come easy.

“I mean, who loans an 18-year-old $250,000?” she asked, smiling as she thought about the impossibility of the dream she made come true.

As unlikely as it seemed, Carter made it happen.

At 18, Carter incorporated her Johnny Ray’s restaurant in Chelsea, becoming the youngest person in Alabama to incorporate a business, she said.

At age 19, that business opened and by any measure, it has been a success.

“My boss at the time, Josh Palmer, who owned the Pelham Johnny Ray’s, was thinking about opening another location in Chelsea, but he was reluctant to do so. He had the Pelham store and he had a family. I told him I would run it for him and he was kind of like, ‘Yeah, right.’ ”

Carter was living on her own in her own apartment, working at Johnny Ray’s and going to school at UAB, studying business.

“I would go to school from 8 to 11 every morning and then work from 11 to 9 every night as the night manager at Johnny Ray’s,” she said. “I was going to school, paying everything on my own.”

She wanted more, and she wanted it quickly.

When Palmer didn’t take her seriously, she went directly to Johnny Ray’s, who told her she first needed to secure the financing for a restaurant, which would cost about $250,000.

“I went to every single bank here — Hoover, Pelham, everywhere — and they basically laughed at me. I had a little bit saved up, maybe $10,000, but that was it,” she said.

The more they laughed, the more persistent Carter became.

“Then, I went to see Kevin Morris at M&F Bank in Chelsea. And he told me he would loan me half the money to do it, if I could come up with the other half.”

Her boss at the Pelham store, Palmer, came through with the other half she needed.

“Everybody says, ‘Oh, your family has money.’ No, no! I didn’t have a dime. I had to borrow money from Josh and from Kevin just to pay for my business license, which was like $100 or something. I mean it was down to the nitty gritty,” she said.

Carter literally lived in her restaurant for weeks before it opened, taking care of every detail of opening the business. Her mother, Linda Riopel, took a week off of work to help, and her younger brothers, Jeremy and Alex, missed several days of school, working with her at the restaurant.

Her family has been an important part of Carter’s success. Brother Jeremy helps manage the Chelsea Johnny Ray’s, which has since expanded to take up the storefront next door to it, and he and Carter have recently opened a second business within it, Yogurt Your Way, which Carter hopes to franchise.

Carter, her mother and Jeremy were dealt a serious blow when their brother and son, Alex, the youngest of the three children, died in a gun accident in 2009.

The family reacted the only way they knew how: they went to work.

“A bunch of people were shocked and some thought it was selfish because we found out about Alex at 2 in the morning and we were at work that same day. We were here every day from opening to close. That was the best thing we could do,” she said.

Alex was Johnny Ray’s biggest fan and loved to promote the business. He loved to wear the Johnny Ray’s “pig” mascot, she said, and his favorite event was the Chelsea July 4 fireworks display, which Carter and Johnny Ray’s sponsor each year.

“He died on June 30 and I knew we had to go forward with those fireworks for Alex,” she said. “Things are a lot different now without him.”

Her family — including daughter, Juliana Swinford, age 4 — is her priority.

“I wanted to prove people wrong. So many thought it was a joke,” Carter said. “I struggled all my life. I watched my mother struggle and go without for us. She wouldn’t get her hair done. She wouldn’t buy herself makeup. It was a big deal for me to go to college. I knew one day I was going to be able to repay her.”

She hopes to eventually sell her Chelsea Johnny Ray’s restaurant to Jeremy and move on to other business pursuits.

Her niche in business is starting them and marketing, she said. She has joined the area’s chambers of commerce and every civic group and organization she can, including strong participation in this year’s South Shelby Relay for Life.

Also, she hopes to eventually be elected to the Chelsea City Council.

“The city and Mayor (Earl) Niven have been so supportive of me. I think I have something I can contribute,” she said.

What will her next business venture be? If she knows, she’s not telling.

“Until I know it’s going to happen, I’d never tell you,” she said, eyes twinkling with infectious enthusiasm. “I do know it’s not going to be a restaurant. I want something totally different.”