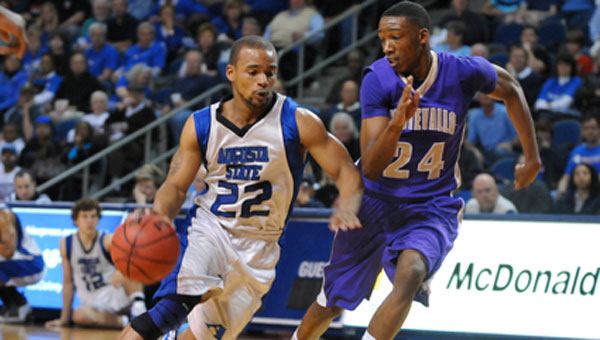 Young remained confident his eight-player squad could hang with Augusta State University, which entered the tournament ranked No. 5 in the National Association of Basketball Coaches’ Division II poll, in the tournament semifinals.

The Falcons made their head coach proud in the first 34 minutes of the game before the lack of depth finally caught up to them in a 61-52 loss to the Jaguars at the USC-Aiken Convocation Center in Aiken, S.C.

Montevallo (18-10) awaits the NCAA Division II men’s basketball tournament selection announcement Sunday, March 6 at 9 p.m. to find out if it has done enough to receive a bid.

The Falcons were ranked ninth in the latest Division II Southeast Region rankings, with only the top eight teams receiving a bid to the tournament. However, Peach Belt Conference foes Clayton State University and USC-Aiken, who were ranked just ahead of Montevallo, each fell in the first round of the conference tournament. Their defeats leave a glimmer of hope for the Falcons’ tournament chances.

Junior guard Tyrell Coleman led the Falcons with 11 points in the semifinal loss to Augusta State. Coleman knocked down 4-of-9 field goals, including 2-of-6 from beyond the arc.

Junior guards Antoine Davis, who was named third team All-Peach Belt Conference before the game, and Ryan Westbrooks added 10 points each. Davis, who hit 4-of-6 field goals, grabbed a team-high seven rebounds and dished out a team-best six assists.

The largest lead held by either team in the first half was three points, with each the Falcons and the Jaguars holding a three-point advantage at some point in the opening 20 minutes.

The margin between the two teams shrunk to two points or less during the first 15 minutes of the second half before a late 12-0 run by Augusta State was too much for the Falcons to overcome.

“I thought we played hard and we were in the game,” Young said. “In the last four minutes, we just fell apart.”

Davis fed Severtsgaard for a jump shot on the baseline for the game’s opening basket nearly three minutes into the first half. Coleman drained a 3-pointer with 14:57 remaining in the opening half to give the Falcons a 5-2 lead.

Augusta State responded with a 13-7 run to take a 15-12 lead following two free throws by George Johnson with 5:09 left in the half. Montevallo followed with a 5-0 run as Davis scored a basket and Brown drained a 3-pointer to put the Falcons back on top, 17-15, with 3:34 remaining in the opening half.

The two teams traded baskets late in the half before Augusta State missed a wide-open layup. The Falcons quickly took advantage as Davis raced down the floor and found Catchings open underneath for a layup to give Montevallo a 23-22 lead with 56 seconds left in the half. Montevallo took a three-point lead, 25-22, into the locker room at halftime after Davis scored a basket with nine seconds remaining in the opening half.

Davis and Brown led the Falcons with six points each in the first half.

The Jaguars opened the second half with a 3-0 run to tie the game at 25-25 in the opening minute of the half.

Montevallo took a two-point lead twice, on a layup by Davis and free throws by Catchings, early in the second half. However, Augusta State responded with a basket each time and kept the Falcons from putting together a run.

Augusta State took a 39-37 lead following a layup by O’Neal Armstrong midway through the second half before a 3-pointer by Coleman put the Falcons back on top, 40-39, with 8:06 remaining in the game. Jervan Jackson hit 1-of-2 free throws to cap a 4-0 run by Montevallo to push the lead to 41-39 before Johnson drained a 3-pointer to give the Jaguars a 42-41 lead with 7:19 remaining.

Coleman swished a jumper with 6:02 left in the game to put Montevallo ahead 43-42.

It was the final time the Falcons led in the contest.

Augusta State responded with a 12-0 run to take the largest lead in the game by either team, 54-43, with 2:09 remaining. Johnson sparked the run with a 3-pointer, which put the Jaguars ahead for good.

Westbrooks drained a 3-pointer with 45 seconds remaining to cut the deficit to 58-50, but the damage was already done.

Augusta State made 7-of-8 free throws in the final minute to seal the victory and advance to the Peach Belt Conference tournament championship game.

The Jaguars avenged a loss to Montevallo in the conference tournament semifinals a year ago with the win.

“Defensively, the game plan was good and we’ve been doing that well all season,” Young said. “We can guard, but we’ve had a problem scoring and a big problem making our foul shots. Free throw shooting has been tough for us all season.”