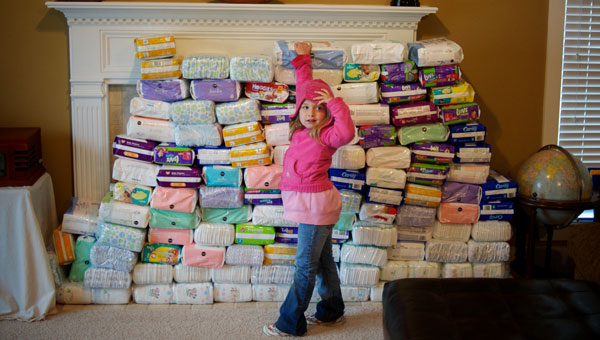 When Maylene resident Kimberly Brannon opened a Shelby County Reporter daily e-mail in late February containing a story about an upcoming charity event, she immediately shared the story with her 5-year-old daughter Emily.

The story previewed a March 6 baby shower, which was held by the North Shelby Baptist Church to benefit the Pelham-based Sav-a-Life Shelby ministry.

In the story, Sonja Bennett, leader of the Women on a Mission ministry at North Shelby Baptist, said her group organized the baby shower to collect items, such as diapers, to donate to Sav-a-Life. Through its Pregnancy Resource Centers in Pelham and on U.S. 280, Sav-a-Life Shelby works to help and minister to individuals and couples facing unexpected pregnancies.

When Emily heard the story, she was instantly touched and driven to help parents who may not be able to afford diapers for their babies.

“The story came in the e-mail one day, and I read it out loud to her,” Kimberly Brannon said. “After that, she went back into her room for a little while, and then came back out and said ‘I want to get 100 packs of diapers to give them.’

After Emily decided to collect diapers for the ministry, she recruited her parents to help her spread the word at her church, her preschool and throughout the community.

Emily sent out e-mails, distributed flyers and posted her goal on Facebook in the hopes of reaching her goal. 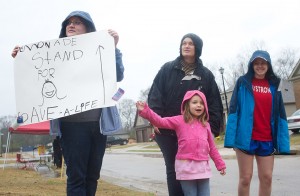 Emily Brannon is joined by her mother, Kimberly, and Sarah Lovinggood and Molly Dobbs in trying to attract customers to their lemonade stand to raise funds for Save-A-Life. (Reporter Photo/Jon Goering)

“We drove around and picked up diapers from everywhere,” Kimberly Brannon said. “We even got money from people in other states.”

Because Emily began her diaper collection about a week before the baby shower was scheduled, she knew she had to work quickly. Though her parents helped, Emily organized many aspects of the collection herself.

With three days left before the baby shower, Emily had gathered 50 packages of diapers from across the region.

“We were at 50 packages on Thursday, and my husband and I started to give her the speech. ‘Well, Emily, 50 is OK,’” Kimberly Brannon said. “But she said that wasn’t enough. We thought that was all she would be able to get, but we were wrong.”

One day before the baby shower, Emily organized a lemonade stand at her house to help her reach her goal. Although the day was filled with torrential downpours and flash flooding, the 5-year-old sold enough to exceed her goal.

“She sold nine cups of lemonade, made $70 and collected 12 packs of diapers that day,” Kimberly Brannon said.

The next day, Emily used her wagon to wheel in 130 packs of diapers into the North Shelby Baptist.

“It was important to her that she bring the diapers to the shower herself,” Kimberly Brannon said. “They (Sav-a-Life) were really excited about it.

“We are so proud of her,” Kimberly Brannon added. “She really has a good heart.”