PROFILE: Raising a family in faith 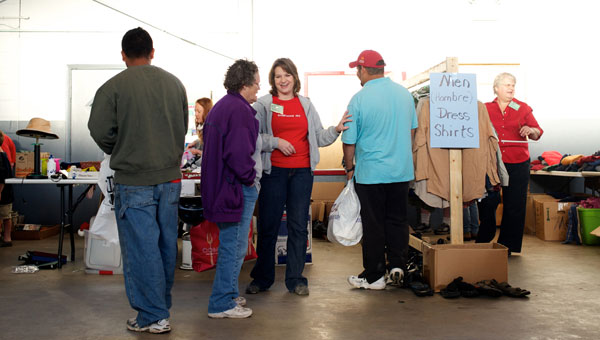 Laughing while chatting with and greeting customers, Rebecca Krueger makes sure guests at the AOK clothing giveaway find what they are looking for. (Reporter Photo/Jon Goering)

When Hurricane Ivan hit the Gulf Coast in 2004, most grabbed their loved ones, packed their cars as quickly as they could and hit the road in search of dry land and safety.

Randy and Rebecca Krueger, along with their daughters, Megan and Emma, packed their pop-up camper, left the relative safety of central Alabama and drove south, passing all those fleeing on their way.

“Everyone was driving north, and we were driving south. We were there for six weeks with no shower,” said Rebecca. “That was the first big (moment), when we knew, ‘If you’re available, God’s going to use you.'”

The Kruegers, who have lived in Calera for the past four years, have held fast to that motto for years. All four work hard to glorify God through their actions every day.

“When you’re doing what God wants you to do, he meets your needs,” Rebecca said. “It’s not (politically correct) to say ‘God, God, God,’ but that’s definitely where our heart is.”

The Kruegers learned about life, love and God from someone who had seen it all – Rebecca’s grandmother, Betty Douglas, affectionately known as “Mama.”

In 2005, while the Krueger family was still reeling from the news that Rebecca’s mother had been diagnosed with breast cancer, another blow came – Mama had a bad fall and needed continual care.

Rebecca and Randy immediately knew they would offer to care for Mama.

“Our family was a huge benefactor of her life of giving, and because of that, there was no way that in her time of need we could do anything but care for her,” Rebecca said.

In just 10 days, the family packed up their home of 13 years in Chalkville and moved to a handicapped-accessible home in Hoover.

The girls, who were 11 and 9 at that time, did physical therapy daily with Mama, constantly reading and sitting with her.

“The girls learned what it really means to love someone, to sacrifice of your own wants in order to meet someone else’s needs,” Rebecca said. “To say it wasn’t hard would be a lie, but to say we were the ones who received the blessing would be an understatement.”

The family’s time with Mama ended after seven months, when she passed away.

Being around someone who truly needed help made the family determined to continue showing that love to all.

On Oct. 9, 2010, all four Kruegers devoted their day to working at the Calera AOK clothing drive from early in the morning until mid-afternoon.

Just before 7 a.m., dozens of residents from Shelby and Chilton counties lined up in the rising sun and morning haze to get what they needed for their families. Eventually, 857 would go through that line.

Calera resident April Miller, who was shopping for herself and her two children, said she was amazed by the clothing drive and the love shown.

“Oh my God, it’s been life-saving. My children are clothed, and I’m not having to work more than one job to buy their clothes, so I can actually spend time with them. It’s amazing,” Miller said as she combed through a box of children’s socks. “It’s the fact that people donate their time and clothes. They have other things they could be doing, but this is for everybody.”

Emma, 14, stood at a rack of coats and shoes, helping anyone who asked try on whatever they needed. Her red shirt read, “Growing in the fruit of the spirit.”

“I love being able to help people like this,” Emma said. “A couple of years ago, a little boy came in with no shoes and socks. He had a pair of socks he wore all the time. They were dirty and just covered with stuff. When we gave him a new pair of shoes and socks, his eyes lit up.”

Megan, 16, worked with her father to serve hot popcorn and sweet lemonade to shoppers. She said she loves the small moments of joy she can offer to families, especially children.

“My favorite is when the little kid gets a bag of popcorn and his face lights up,” Megan said. “Even with a language barrier, you can see, ‘IT’S POPCORN!'”

Megan said she works to use her talents for God’s glory. She writes music and lyrics about “life and God.”

“I feel like God gave me the talent to write and the passion to do it. So I feel like that’s what God wants me to do,” she said.

Megan and Emma are also involved with Calera’s community in different ways – Megan has played the role of Belle, of “Beauty and the Beast,” at the Calera Public Library’s Fairytale Ball, while Emma is a team helper with the Field of Angels special-needs baseball league.

“It’s really neat to see how God has opened doors for us to be used. We couldn’t do this by ourselves,” Megan said.

The Kruegers also spearheaded the initiation of the Calera Farmers Market. Rebecca and Randy came up with the idea through discussions with city officials, and Rebecca serves as the market manager.

They worked to get a grant to help fund the market, which had a very successful first year in 2010.

“It wasn’t just, ‘come pick up your produce,'” Rebecca said. “It was, ‘come meet your neighbors.’ The farmers market was an outlet to help promote community.”

Randy agreed, saying he wanted to be proactive in Calera instead of being negative.

“We did something to help Calera become a better place and a better community instead of sitting around saying, ‘The City Council is spending more money,'” Randy said.

Others have noticed the Kruegers’ devotion to their home city. Peggy Lee, an organizer for the AOK drive, said the Kruegers never cease to amaze.

Randy, who teaches a Bible study for teenagers, said his focus is on trying to understand what God wants him to do. As long as he leaves the keys to his spirit in God’s hands, he’ll be OK.

“Before God redeems us and brings us back, we’re dead. What I do to serve God is not about me at all,” Randy said. “The more I understand how much he loves me, the more natural it becomes. It’s about getting closer to him.”

However, all of it – the AOK clothing drive, the Calera Farmers Market, the Bible study class, helping family members – all of it is just what the Kruegers do. It’s natural for them.

“My hope is that through what we do, others will realize, with just a little bit they can help the community,” Rebecca said. “We don’t feel like we do very much.”

Kurt Russell, president of Abiding Hope Ministries, works diligently to supply both food and clothing to people in need in... read more