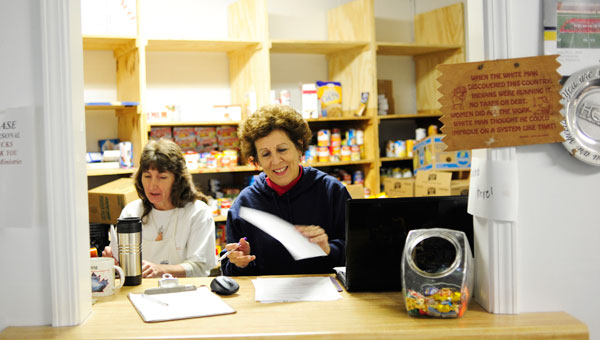 A chill from the frosty morning might prick the air inside Shepherd’s Harvest Church in Alabaster if warmth didn’t radiate from those leading the Saturday service.

There is no judgment here.

As worship begins, people don’t sheepishly seek an open spot on the back row — they walk to the front with smiles wide.

The words flowing forth from Don Smith’s mouth passionately plead with the visitors to know God isn’t punishing them with their struggles. He implores them instead to understand that all have struggles and all should use them to better appreciate life.

“Something all of us goes through, but especially the poor, is pain and suffering. To address it, and let the scriptures bring them a better understanding, helps ease their pain,” Smith said.

Smith added that many times a myth spreads when someone is going through something that they must have done something bad.

“This is happening all over America right now and people just have to call out to God,” he said. “You’re going to see things the way God sees them because you’re going to identify with suffering.”

While Smith warms hearts inside the church with God’s love, fellow volunteers, not a mile down the road, prepare to fill the cars of those same people with food.

Manna Ministries began modestly out of Smith’s garage 26 years ago when he felt convicted to be more than a Sunday Christian.

Two decades later, volunteers continue to seek out those most in need and feed them both spiritual and physical daily bread.

“When they call we go. Some way, somehow we’ll be there,” said longtime volunteer Wayne Blankenship.

Sysco provides frozen fish and meat sometimes as often as twice a week. Publix regularly provides baked breads and pastries still days before their sell-by date. Piggly Wiggly sends them away with boxes of items like Hungry Jack potatoes.

Volunteers warm themselves inside the storeroom as they proclaim God’s goodness proven by shelves overflowing with canned vegetables and snack cakes. One glorious day in October, volunteers had to place tables of food outside a storeroom crammed to the brim, said Smith.

“Some weeks we run like dogs,” Smith said. “But those are the good weeks. It’s the weeks we don’t get calls that we dread.”

Volunteers dread the weeks when no stores call with loads of food to take away. They dread these situations because they worry how they’ll look those in need in the eye if they don’t have enough to fill their carts each Saturday.

Blankenship clearly remembers the first time he asked a store for food.

Volunteers love their “grannies,” mostly widowed women who come through the food line each and every week to supplement fixed incomes. Many regularly fill the mouths of multiple family members — children who’ve lost jobs or grandchildren they now raise.

One of those grannies is Cellie Watson of Birmingham. Watson receives a small pension check. She came to rely on the help of Manna in 1999 but the organization remains diligent in keeping her fed 11 years later.

Watson cooks one mouth-watering meal a year for the board’s annual meeting.

“If they can feed me all the year, I can feed them once a year,” she said. “The Lord has blessed us with them.”

What they get in return is immeasurable.

Eleven-year-old Jonathon Hadden of Alabaster works at the ministry every week.

“The people here are my friends now and I get to help them,” he said. “I’ve got to know them pretty well since I began coming.”

Longtime volunteer Debbie Davis of Montevallo asks her kids to stock buggies with her each Saturday morning.

“We bring our kids out here, our families out here so we can teach them to love others,” she said.

Manna doesn’t aim to fill a buggy and send those in need on their way.

Volunteers pack the cars of those in need with food and then stand and talk to them a while about the weather, about their life, about God.

They aim to fill their stomachs and their souls.

Executive Director Phyllis Harbin said the greatest testament to their efforts lies in seeing people lifted out of the food lines by God to volunteer.

Just a year ago, 16-year-old Maria Herrera pushed a buggy brimming with food out into the parking lot with her mother, Guadalupe, and her three sisters. Herrera and her family now stand behind the tables filling those same buggies.

“We had come here to the church because we didn’t have enough money for food,” Herrera said. “But when we realized they needed help, I thought, ‘I can help.'”

And so she did.

The Herrera’s still need the help of Manna from time to time to ease the ever-growing costs of feeding a family. But still being in need now and again prevents them from forgetting what those in line feel like.

Herrera, Gaudalupe, Silvia, Iris and the youngest sibling Natalie rise early every Saturday to do their part. Natalie particularly loves to make up decorated bags of sweet muffins, candy or Little Debbie cakes for the kids. Guadalupe brings hot tamales each week for the volunteers.

Smith wishes more people had hearts like the Herreras.

“I want people to get off the pew; get in their community and let them see Jesus,” Smith said.

North Shelby resident Dr. John Hard, a WWII veteran, looks forward to the cockpit of a restored B-17 while in... read more