PROFILE: What’s in a name? 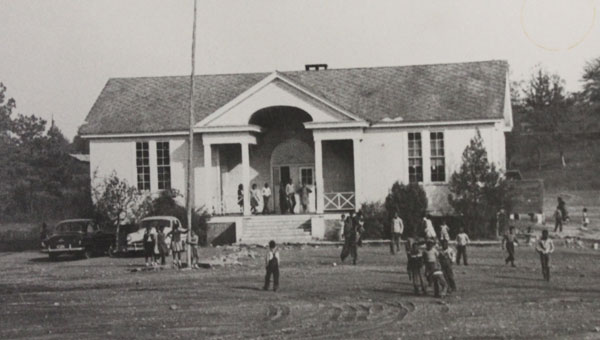 Looking through the most recent Shelby County phonebook or taking a look at the weekly public records in the county courthouse will yield no mention of a family forever entwined in Alabaster’s history.

“I don’t think any of the family is living anymore,” said Bobby Joe Seales, president of the Shelby County Historical Society. “The last living member died several years ago.”

Visiting one of Alabaster’s schools, reading about the city’s history or taking a walk on the Buck Creek Trail, it is easy to see why the Thompson name lives on nearly 90 years after the death of the man who started it all.

T.C. Thompson was the third child born to Jesse Sampson Thompson and his wife, Henrietta in 1850. From humble beginnings in Oak Bowery, slightly north of what is now Auburn, Thompson built an empire in Jefferson and Shelby counties before his sudden death in 1922.

Today, Thompson High School, the remains of the Buck Creek Cotton Mill village off Alabama 119, the Empire building in downtown Birmingham and many other local landmarks exist today because of Thompson’s works.

After Thompson and his wife, Julia, moved to Siluria in the early 1890s, the businessman incorporated and slowly began building one of the largest cotton mills in the nation along the banks of Buck Creek.

As the years passed, more and more people began moving into present-day Alabaster to live in the mill’s village, which featured everything from general stores to a hotel and doctor’s offices.

Much like the recent population boom in present-day Shelby County, the influx of people in the early 1900s also placed a burden on the area’s schools, said Seales. At the time, Siluria had an elementary and a junior high school, but no high school.

One year before his death, Thompson donated land and invested his personal money to construct a wooden, four-classroom Thompson High School building near where Thompson Intermediate School stands today.

The original building was a far cry from the seemingly endless hallways and cavernous gymnasiums of the current THS.

Students from other towns, like Elliottsville, rode to THS in the school’s first school bus, which consisted of a covered wagon pulled by a pair of mules.

When the school system hit uncertain economic times, T.C. Thompson again paid out of his own pocket to ensure the school remained active and the teachers were compensated for their work.

“Mr. Thompson would pay the teachers when the school system didn’t have any money to pay them,” Seales said. “He was really involved, as you can tell.”

As the years passed, the wooden building began to deteriorate due to semester after semester of wear and tear on the aging building.

“The building was really in awful condition,” Seales said as he looked at grainy, black-and-white photos of the school. “In the later years, they didn’t really do a lot to keep the building up.”

The school continued to deteriorate until a disaster struck at 10:15 p.m. on Jan. 23 1951. Firefighters responded to a fire engulfing the high school and the nearby junior high building. By the time the fire department had the blaze, which started in the school’s lunchroom, under control, both buildings were in ruins.

“The rumor has it that the building ‘accidentally’ burned down because it was so dilapidated, and that was the only way they could get a new building,” Seales said with a laugh.

Because the school system had added an eight-room brick building near the wooden high school and junior high buildings in 1949, which did not burn in the fire, school officials decided to rebuild the high school by adding onto the brick building.

The rebuilt high school served the city until 1987, and currently serves as the Thompson Sixth-Grade Center and Intermediate School.

Because the county’s population was much lower in the 1950s than it is today, the old THS building served students from as far away as what is now Greystone and Hoover on U.S. 280.

“The Thompson school zone went all the way to about one-and-a-half miles on the other side of 280,” said Allen Fulton, a former THS principal and 1961 graduate. “There was no Chelsea, no Oak Mountain and no Pelham back then.

“It’s amazing that everyone from that huge area went to Thompson,” Fulton added. “The history of Thompson runs deep because it affected so many communities throughout the years.”

Even though Thompson High School is synonymous with Alabaster today, it is not the only high school the city has had. In the late 1960s, segregation created a short-lived black-only school in the Simmsville community.

For decades, Thompson was a whites-only school and black students attended grade school in a small wooden building off U.S. 31.

When the black students reached the high school level, they were bused to Prentice High School in Montevallo, which is now the Montevallo Middle School.

“The school only existed for one year, because they integrated the schools the year after the school was created,” Seales said. “That building then became the Renaissance High School.”

After the schools were integrated, the Thompson High School building on Alabama 119 slowly became more crowded every year, and the conditions at the school deteriorated throughout the late 1970s, Fulton said.

“The old school was in bad shape by the time we moved out of it,” Fulton said of the Alabama 119 building. “The plan was to build a new high school, so they did only essential maintenance on that building. The problem was that it was like that from 1971 until they built the new high school in 1987.”

After the current THS building was completed in 1987, school officials slowly moved “everything that was not nailed down” from the old high school to the new building, Fulton said.

“Then on a Friday, we went class to class and dismissed them to the gym while we loaded their desks onto a truck and took them to the new high school,” Fulton said. “Then we started class at the new building on that following Monday.

“The kids were really excited, because the new building allowed us to offer a lot of programs that we didn’t have the facilities for at the old building,” Fulton added. “And that new building has served us very well since then.”

Property off of County Road 26 in Saginaw fills up with water during the heavy rains on March 9. (Reporter... read more