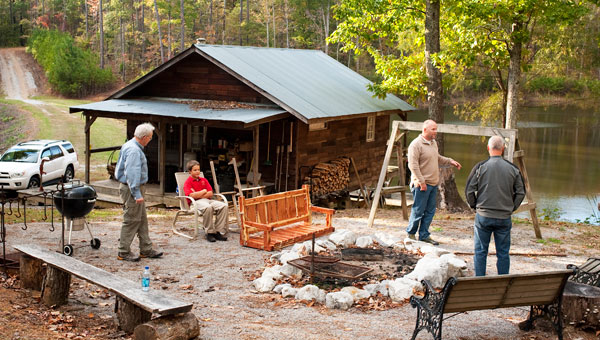 The Ellis family loves to spend time at this cabin on their property, which several family members built by hand. (Reporter photo/Jon Goering)

On a crisp October day on the Ellis family farm in Columbiana, father and son Butch and Corley Ellis ambled through the barn, collecting what they needed to feed their three beautiful horses.

Beyond the pen where the horses cantered, a fertile family garden grows with fig trees, muscadine vines and grapevines.

As Butch and Corley filled water pails and feed buckets, they talked quietly with each other, often breaking into smiles or chuckling together.

As Butch stayed at the fence, petting the horses, Corley said the two of them are a team – as is the entire Ellis family.

“We’re such a close-knit family,” he said. “We truly enjoy each other’s company.”

Butch and Corley Ellis share many things – a love for Auburn University, a deep desire to enjoy the outdoors and, perhaps most tellingly, quick smiles and even quicker wits.

The two consistently lob jokes at each other, looking to make anyone around them feel comfortable. Ask Butch, who has been the county attorney for almost 50 years and who spent a decade in the Alabama Senate, what he wants people to remember about him, and he’ll say with a straight face, “The main thing I want my legacy to be is a long way off.”

Mention Corley’s charming wife, Julie, and he’ll tell the story of how they first met at a yard sale, topping the tale off with “I like to tell people I picked her up at a yard sale.”

However, the Ellis family’s influence in Shelby County is downright serious, starting with Butch’s grandfather, Handy Ellis, who was Columbiana mayor for several terms before becoming a state senator and, later, lieutenant governor.

Handy’s son, Frank, Butch’s father, “was the only one in the family with good judgment,” Butch said. “He was a farmer.”

Frank owned a dairy farm in Columbiana, where Butch and other various members of the Ellis family now reside. The farm covers around 450 acres of land.

Perhaps that explains why Butch went to Auburn with no intentions of being a farmer. Instead, he began by studying mechanical engineering.

“Back then, you took an aptitude test when you went to college, but they didn’t share the results of the test with you,” Butch said. “I was in mechanical engineering, and I had trouble with mechanical drawing. I went to the counselor, and he said, ‘It’s no wonder. You have no mechanical ability at all!'”

Soon enough after that, Butch found his way into law school. He married Diane Bentley after his first year of law school, as she supported him on a $35-a-week job. They had been sweethearts since she was 14, he 15.

After Butch graduated law school, he moved back to Columbiana with his bride and the rest, as they say, is history. The two had three children, Christy, Kelly and Corley – all of whom either live on the family farm or close by.

While the three were growing up, they watched their father fight for Shelby County in the state Senate from 1982-1994. He helped pass a special tax in 1993 to pay off the county’s debt, which had Shelby County teetering dangerously close to bankruptcy.

Butch’s oldest daughter, Kelly, is a pharmacist, while Christy is a full-time mom. Corley, the only son, is a real estate broker and a county commissioner, committed to affecting the county in a positive way as his father has.

“My interest in politics goes back to when Dad was in the Legislature and we were in financial trouble (in Shelby County),” Corley said. “That’s when I took an interest in strategic planning. The rest of the time was just waiting for an opportunity. Don’t know if I was looking for it, but it fell into my lap.”

Corley was appointed to the County Commission in 2006, after Commissioner Billy Thompson passed away. He was re-elected in 2008, and now is the commission chairperson.

While he’s proud of his record of public service, he has no problem joking about it.

After he became a commissioner, Corley attended a conference where he was asked to explain why he became a public servant.

“I said, ‘My great-grandfather was the lieutenant governor, my dad was in the legislature, so you’d have thought I’d know better than to get into politics,'” Corley said with a huge smile as Butch chuckled.

He quickly turned serious again, however, as he spoke about living up to his family history of service.

“It does give the responsibility, for lack of a better term, to step up and do your part,” he said. “I have big shoes to fill.”

Butch said Corley’s on the way to achieving just as much as his forebears did.

“It makes me feel very proud. A big part of my life has been for the county,” Butch said. “What we have now is a very strong county. I’m very proud of that and proud Corley’s a part of that. I’m pleased to see Corley shoulder some of the responsibility to keep it on track.”