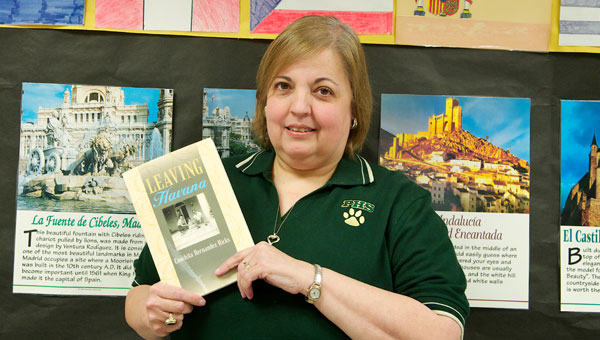 Even though she was only 6 at the time, Alabaster resident Conchita Hernandez Hicks still harbors vivid memories of her last days spent in Cuba in the early 1960s.

In Cuba, Hicks’ father was a successful accountant and her mother held a doctorate in mathematics. But one day, a violent political coup changed their lives forever.

“I’ll admit, I was a spoiled little girl. My family had money. We had a big house, a nanny and a chauffeur, and it was all taken away from us just like that,” said Hicks, who now teaches Spanish at Pelham High School.

In a matter of hours, Fidel Castro’s 1959 seizure of power in Cuba caused what was the Hernandez’ wealth to become the country’s. Over the next few years, the family made the difficult decision to flee the country and start over in America.

“For me, it wasn’t that bad. Little kids are resilient,” Hicks said of leaving Cuba in 1961. “Now that I’m an adult, I know it must have been incredibly difficult for my parents to make the decision to leave.

“They left this life of incredible luxury, and came here with 66 pounds in a suitcase,” Hicks added. “They had to come here and basically start over from the bottom.”

When Hicks and her family arrived in Miami, they lived in a rented home and struggled to make ends meet. Her father, who was an accountant in Cuba, eventually found work loading soda bottles onto a truck each day.

“He did this until he could buy an old car,” Hicks said. “Then, he and my mother sent out resumes all over the place. They agreed that the first one to find a job, the family would move there.”

After about a year in Miami, Hicks’ mother found a job at the University of Montevallo and moved to Shelby County, where Hicks has been living for more than 30 years.

Though the family was able to re-stabilize itself in Alabama, the effects of the Communist overthrow in Cuba still had lingering effects.

“My father’s parents were not able to come with us when we left Cuba. I never saw my grandfather again,” Hicks said. “I saw my grandmother for a very short time when my parents went through a lot of red tape to allow her to visit us.”

Throughout the years, Hicks and her sister, Vivian Thorn, urged their parents to write down their memories of Cuba to serve as a memoir for future generations. However, both of Hicks’ parents passed away before they were able to begin the task.

Last year, Hicks decided to take matters into her own hands, and authored the book “Leaving Havana,” which is now available on Amazon.com, BooksAMillion.com and other book vendor sites.

“My original intent was not to have it published. I just wanted my children and my grandchildren, and maybe their children, to know what my parents went through to get us here,” Hicks said. “I just wanted them to be able to appreciate the freedom they have now.”