Falcons knocked out of NCAA tournament 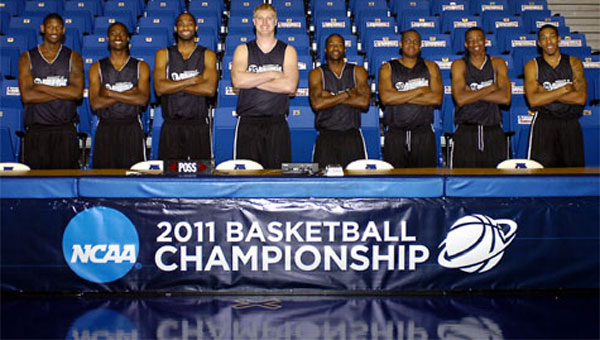 An unlikely run by the University of Montevallo men's basketball team came to end following the Falcons’ 82-76 loss to Anderson University in the second round of the NCAA Division II tournament March 13 at Christenberry Fieldhouse on the Augusta State University campus in Augusta, Ga. (Contributed)

Down to seven scholarship players and a walk-on, the Falcons faced an uphill battle to earn a second-consecutive berth entering the Peach Belt Conference tournament. Faced with long odds, Montevallo performed well in the conference tournament and found a way to slide in one of the final spots in the Southeast Region.

An unlikely run came to end following the Falcons’ 82-76 loss to Anderson University in the second round of the NCAA Division II tournament March 13 at Christenberry Fieldhouse on the Augusta State University campus in Augusta, Ga.

The Falcons, who started the season with 11 scholarship players, seemingly ran out of gas as they fell short of the regional finals for the first time in a trip to the Big Dance.

“For all the things we went through, we had a pretty good year,” said Montevallo coach Danny Young. “The guys have nothing to hang their heads about. They actually played really well. We were hoping we had enough gas in the tank to finish. They were really tired and that took its toll.”

Montevallo defeated Anderson 79-75 in their second game of the season at Bank Trust Arena, but the Falcons (19-11) were unable to hang on to an 11-point second-half lead against the Trojans in the Southeast Region semifinals.

Ryan Westbrooks had one of his best-shooting nights of the season as he led Montevallo with a game-high 21 points on 7-of-11 field goals from beyond the arc.

Antoine Davis contributed 19 points on 8-of-12 shooting from the floor and dished out a team-best eight assists. Jonas Brown, who hit 5-of-8 attempts from 3-point range, added 17 points. DeMarcus Cathings finished with 16 points and a team-high nine rebounds.

The Falcons shot 45 percent from the floor, including 54 percent from 3-point range in the season-ending loss.

Montevallo jumped out to an early 2-0 lead following an offensive rebound and tip-in by Jackson less than a minute into the game.

Anderson took a 4-2 lead following a 3-pointer by Brandon Young before Brown drained a 3-pointer from the corner to put the Falcons back on top, 5-4, with 17:20 left in the opening half.

Anderson knocked down a free throw and regained the lead, 7-5, following a jumper by Denzail Jones with 16 minutes remaining in the opening half. The Trojans held onto the lead for the next few minutes before Wesbtrooks caught fire from beyond the arc midway through the first half, knocking down five long-range bombs with a span of five minutes.

Westbrooks, who drained three consecutive 3-pointers on three possessions during the span, turned a one-point deficit into a 26-20 Montevallo lead following his fifth 3-pointer during the stretch with 7:24 remaining in the opening half. The six-point advantage was the Falcons’ largest lead in the first half.

Westbrooks even knocked down a 3-pointer after a whistle for an Anderson foul that didn’t count in the scorebook at one point.

Montevallo held onto the lead until Oskars Ernsteins drained back-to-back 3-pointers to put Anderson back on top, 36-34, with 1:59 left in the first half.

Davis scored a layup with six seconds left in the opening half to give Montevallo a 40-39 lead heading into the locker room at halftime.

Westbrooks, who finished 5-of-6 from 3-point range in the first half, led all scorers with 15 points at the break.

Montevallo knocked down 7-of-10 attempts from beyond the arc in the opening half. The Falcons shot 58 percent from the floor in the first 20 minutes. Anderson finished 8-of-14 from 3-point range in the first half.

Montevallo used a fast start in the second half to take an 11-point advantage, which was the Falcons’ biggest lead in the contest.

Davis hit two free throws less than a minute into the second half and Catchings knocked down a jumper off an assist by Davis with 18:59 left in the game to give Montevallo a 44-39 advantage.

Brown drained a 3-pointer less than a minute later. Catchings threw down an alley-oop dunk off a feed from Coleman and stepped to the free-throw line to convert a three-point play, which capped a 10-0 run by Montevallo to start the second half and give the Falcons a 50-39 lead.

Anderson responded with a 7-0 run to cut the Montevallo lead to 50-46 following a 3-pointer by Tyrell McDowell and two free throws by Young. Davis scored a fastbreak layup off a steal with 15:32 left in the game to push the Falcons’ lead to 52-46.

Anderson responded with a 4-0 run to cut the Montevallo lead to 52-50 with 14:34 remaining in the game. Coleman hit 1-of-2 free throws to push the lead to three points and Westbrooks drained his first 3-pointer in the second half with 12:17 remaining in the game, which gave the Falcons a 56-50 advantage.

Young knocked down a jumper in the paint to cut the Montevallo lead to 56-55 with 9:34 left in the game, and Anderson took its first lead in the second half after Trull drained a 3-pointer. Trull’s long-range basket capped an 8-0 run and gave Anderson a 58-56 lead with 8:50 remaining in the game.

Westbrooks put the Falcons back on top, 59-58, after he knocked down his seventh 3-pointer in the game with 7:49 left.

Young responded with a layup to give Anderson a 60-59 lead. Cornwell knocked down two free throws with just more than seven minutes remaining to push the lead to 62-59.

Anderson cut the lead to 66-64 after two free throws by Denzail Jones. Catchings hit 1-of-2 free throws with 4:27 remaining to give Montevallo a three-point cushion before Jones tied the game at 67-67 with his three-point play at the 4:04 mark in the second half.

The Falcons never led again in the contest.

Ernsteins drained his first 3-pointer in the second half with 3:35 remaining, which gave Anderson a 70-67 advantage in the final minutes. Catchings responded with a layup to cut the deficit to 70-69 with 3:25 left in the game.

Cornwell scored a layup with 1:29 left in the game to cap a 6-0 run by Anderson and push the lead to 76-69, which was too much for the exhausted Falcons to overcome late in the game.

Still, Montevallo gave Anderson its best shot in the final minute and a half. The Falcons capped a 7-2 run following a 3-pointer by Brown with 21 seconds remaining to cut the deficit to 78-76.

Trull drilled two free throws with 20 seconds left to give Anderson an 80-76 cushion and Coleman had a layup attempt blocked on the other end, which sealed the Anderson victory.