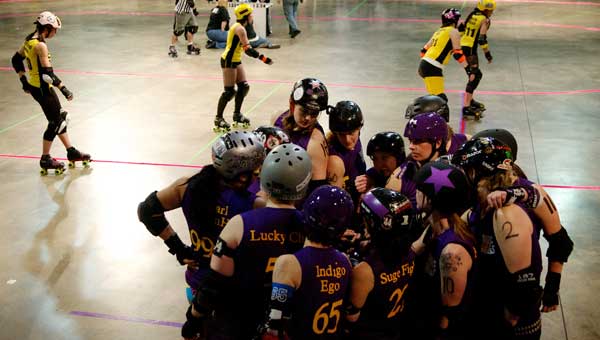 The Tragic City Rollers huddle up before their season opening bout March 12 at the Zamora Shrine Temple in Birmingham. (Reporter photos/Jon Goeing)

Late on a Wednesday night, a group of athletes in Shelby County stretched while their coach drilled them on the next weekend’s season opener. The coach shouted out instructions from what to eat before the game to how to get in a game-day mindset.

“If you’re not having trouble sleeping at night, you’re not doing it right,” the coached yelled.

The athletes – decked in pigtails, ripped tights and brightly colored socks – gathered not at a basketball court or soccer field, but on the skating rink at Skates 280 in Inverness.

It’s there that the Tragic City Rollers, Birmingham’s only all-female roller derby league, practice three nights a week, leaving sweat, blood and tears on the track. 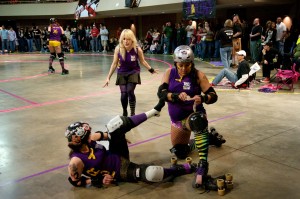 Tragic City's Pearl Harmher, right, tapes up teammate Dixie Trash before the start of the bout.

Before practice March 9, the league’s president Laura Eason, who in the derby world is known only as her alter ego, Voodoo Lily, explained how the league has grown larger than ever going into its sixth season.

“Our league has grown tremendously, especially this year,” she said. “We’re now to the point where we have two teams in the league – an A team and a B team. Each team has about 20 people.

The popularity of the sport locally is evident through the number of interested recruits, Lily said. The league holds recruitment and tryouts only twice a year now, to cut back on interruptions during the March-November season, she said.

The league is open to all skill levels and body types, Lily said. Despite popular misconceptions, previous skating experience and a large build are not required. The required attributes are more about character, she said.

“It takes a certain kind of person to play this sport,” Lily said. “Someone who’s driven. You’re going to get hurt, so it’s got to be someone who can fall and get back up. Everybody here gets back up. You can see that in how they are outside of TCR as well. A sense of humor is key in this game. And the ability to leave it on the track.” 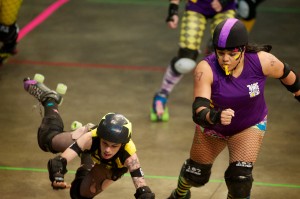 Lily warns that the game does require physical prowess, however, which the league helps members develop through practice and training. Each player is required to wear a helmet, knee and elbow pads, wrist and mouth guards to ward off injury, she said.

“Roller derby is becoming more of a mainstream sport,” she said. “TCR particularly has worked hard to establish ourselves as a sport. It’s not made up. Not one bit of it is staged.”

With members taking on names like Assault E. Senorita, Pearl Harmher and Panama Jack You Up, Lily said getting to create an alter ego is also a draw to the sport.

“We encourage people to bring their own flair to it,” she said. “I think part of the draw to the sport is getting to create that persona and being that person on the track.

“It’s easier to be aggressive toward someone when you’re under that persona,” she said. “My real life person would never go up to someone I know well and just deck them. But if it’s Voodoo Lily and Acute Pain on the track, that’s different.”

Lily said one of the greatest things about the league is the second family it provides for its team members. Despite their similar flair for costumes on the track, off the track the team members could not be more different, she said.

“Derby girls are like that movie ‘Fight Club’ – we’re everywhere,” Lily said. “On this league we have nurses, PR professionals, students, cops, you name it. They come from all types of occupations and walks of life. That’s great because I wouldn’t have met all these people anywhere else. That’s probably what I’ve enjoyed the most about roller derby, is the new people it’s introduced me to. You meet people you can turn to on the track and off.”

For more information on the league, its schedule or recruitment, visit Tragiccityrollers.com.