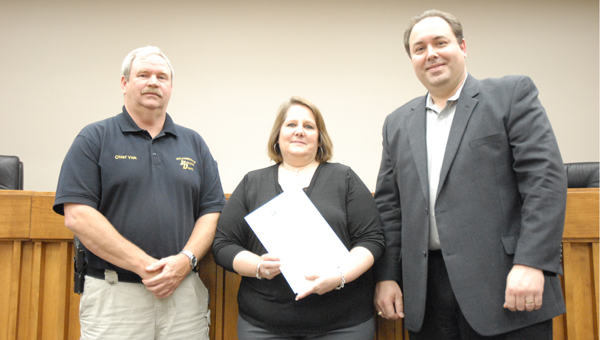 COLUMBIANA – Traveling back to her home just outside the city limits on a Saturday night a couple weekends ago, Sonja Parsley noticed the car in front of her driving erratically.

Sitting in the passenger’s seat with her 17-year-old daughter at the wheel, Parsley called the Columbiana Police Department to report a suspected drunk driver.

Her call led to the arrest of the driver of the other vehicle, who was charged with at least one count of DUI.

The Columbiana City Council on March 15 honored Parsley for her actions during its regular meeting at City Hall. Columbiana Mayor Allan Lowe and Police Chief Lamar Vick presented Parsley with a letter of commendation

“We just want to commend her on her actions,” Lowe said of Parsley, who followed the drunk driver for more than 15 minutes, relaying their whereabouts to CPD Dispatcher Deborah Hall.

Parsley’s actions “demonstrate the high degree of concern and responsibility you so obviously have for our community and our families,” Lowe read from the letter. 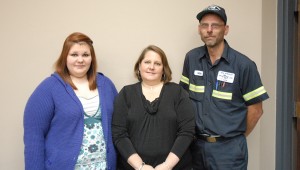 Sonja Parsley (center) poses for a picture with daughter MaKenzie Ashley (left) and husband Mike Parsley after the Columbiana City Council meeting March 15 at City Hall. MaKenzie was at the wheel as Sonja rode in the passenger's seat. (Reporter photo/Brad Gaskins)

“Your decision to call Columbiana Police Dispatcher Hall about the dangerous situation created by the driver of the vehicle immediately in front of you and your daughter was absolutely the right thing to do,” Lowe read. “Your actions directly contributed to the removal of a dangerous driver who could very easily have taken the lives of other drivers or pedestrians.”

Parsley said she was “just doing what was right.”

“Anybody else would have probably done the same thing,” she added.

Parsley credited her daughter for first noticing the erratic driving of the other vehicle.

“If it wasn’t for MaKenzie, I would not have realized it when I did,” Parsley said. “She’s the one that brought it to my attention. I was so focused on her driving that she told me, ‘mom, this person in front of us is driving crazy. They’re all over the road and about to run over cars.’”

It’s not the first time somebody has called police to report a drunk driver, Lowe said. Often, he added, the caller and the suspected drunk driver will go their separate ways. But Parsley stayed with the driver and provided constant updates as police responded.

“It was a good play-by-play,” Police Chief Vick said.

In other actions from the 35-minute meeting, the council:

– Adopted a resolution to repair for $1,430 an air conditioning unit at the Southeast Shelby Rescue Building.

– Approved Revenue Officer Joanna Seale to use the city credit card for meals and accommodations April 5-8 in Tuscaloosa at the Alabama Municipal Revenue Officer Certification Institute. Charges are not to exceed $450.

– Adopted a resolution to extend to Jan. 17, 2013 a contract with the state of Alabama for the Pitts Drive Project.