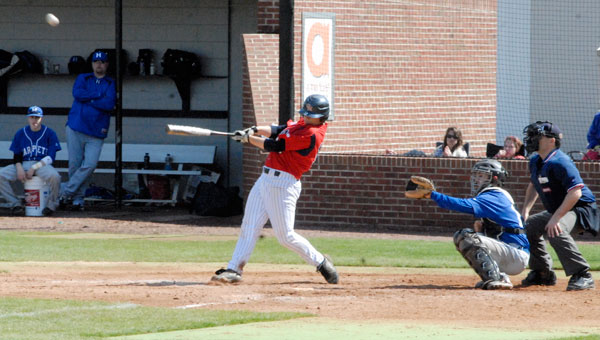 Breeze, who worked as an assistant under Pelham coach Jeff Mauldin last season, left behind a team with several collegiate signees for a squad with several Southeastern Conference commitments.

Breeze saw the Eagles at the top of their game in a 13-3 win over Harpeth High School (Tenn.) in the Buccaneer Classic at Hoover High School.

Oak Mountain (10-4) pounded out 15 hits and plated 13 runs in an offensive explosion to improve to 2-0 in the spring break tournament.

Breeze pinpointed the middle of his batting order, which included Richard Greene, Jake Hubbard and Heath Quinn, as the key to the Eagles’ healthy offense this season.

“The middle guys are our solid base,” Breeze said. “They’ve really carried our team.”

Hubbard, an Alabama signee, led the Eagles at the plate as he finished 3-for-3 with two doubles. Hubbard drove in three runs and scored four runs.

Quinn finished 3-for-4 with a double. Quinn drove in five runs and scored a run. Greene went 1-for-1 with an RBI and a run scored.

Sam Knotts finished 3-for-3 with a double and scored four runs. David Dahl, an Auburn commitment, went 2-for-3 and scored three runs.

Matthew Byars went 1-for-3 with a run scored and an RBI. Barrett Gossett finished 1-for-1 and stole two bases. John David (J.D.) Crowe, an Auburn signee, went 1-for-4 at the plate. 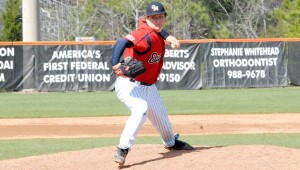 Oak Mountain High School sophomore Justin Hoyt delivers a pitch to the plate in the Eagles' 13-3 win over Harpeth (Tenn.) in the Buccaneer Classic on March 15. (Reporter Photo/Wesley Hallman)

Justin Hoyt earned the win in a five-inning complete game to run his record to 2-1. The sophomore left-hander allowed only three runs on four hits with three strikeouts and two walks.

Hoyt gave up two runs in the second inning after the Eagles struggled to field back-to-back bunts. Hoyt struck out the side to end the threat.

“(Hoyt) has been throwing well for us,” Breeze said. “He’s very smart and athletic on the mound.”

Oak Mountain scored two runs in the top of the first inning following an RBI single by Greene and an RBI double by Hubbard.

After giving up two runs in the second inning, the Eagles responded with five runs in the third inning. A two-run single by Quinn was sandwiched by RBI singles by Hubbard and Byars.

The Eagles gave up a run in the top of the fifth inning before Oak Mountain ended the game due to the mercy rule in the bottom half of the inning.

Knotts opened the inning with a single before pinch-hitter Tyler Lee drove him in with a sacrifice fly. Dahl plated the final run on a line-drive to center field by Quinn.

The Eagles dropped their second day of a doubleheader March 15 following an 11-4 loss to Cullman.

Nick Bietghofer took the loss on the mound.

Crowe plated the first run for Oak Mountain with his RBI single in the third inning.