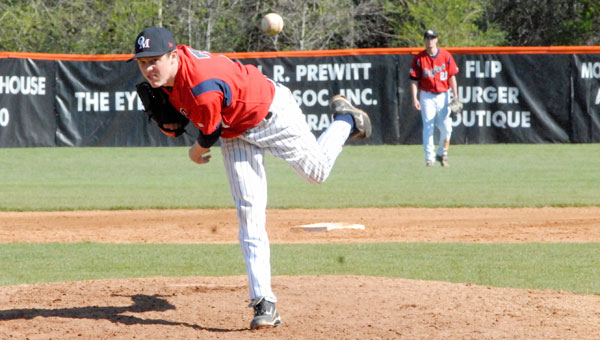 Knotts will get some work on the mound March 17 in one of the Eagles’ biggest tests this season in the Buccaneer Classic quarterfinals.

Oak Mountain coach Brian Breeze isn’t concerned about Knotts taking the mound based on the Eagles’ pitching success in the tournament this week. Every time the Eagles needed a few solid innings during pool play, they got them, including a tag-team effort by Jacob Pierce and David Tomlinson in a 16-6 win over Alexandria in the first round of the tournament.

Breeze expects the same effort out of anyone who takes the mound on the final day of the tournament, which could include a semifinal and championship game if Oak Mountain can get past Oxford.

“Our starting pitching has been solid,” Breeze said. “We’re excited about some guys we’ve got left.”

Pierce picked up the win on the mound after giving up four runs with two walks in 2 1/3 innings against Alexandria. Tomlinson relieved Pierce and allowed two runs on two hits with two strikeouts and two walks in the final 2 2/3 innings in the five-inning game.

Knotts shined at the plate for the Eagles (10-6) as he finished 2-for-3 with a two-run homer to center field in the first inning. Knotts drove in four runs and scored two runs.

Jake Hubbard went 1-for-2 with two RBIs and two runs scored. Heath Quinn finished 1-for-3 with an RBI and a run scored.

The Eagles scored three runs in the fifth inning and two runs in the sixth inning to take a commanding 8-2 lead. However, Houston rallied for a come-from-behind victory with six runs in the final two innings.

Houston scored four runs in the bottom of the seventh inning to overcome a three-run deficit and clinch the win.

Greene led the Eagles at the plate as he finished 3-for-4 and drove in three runs.

Robby Clements took the loss on the mound after giving up eight earned runs on seven hits in 6 1/3 innings. Clements struck out 10 batters and allowed only one walk before leaving the game with one out in the bottom of the seventh inning.

FROM STAFF REPORTS The University of Montevallo baseball team gave up four runs in the bottom of the ninth inning... read more