No development set for ‘tree tunnel’ 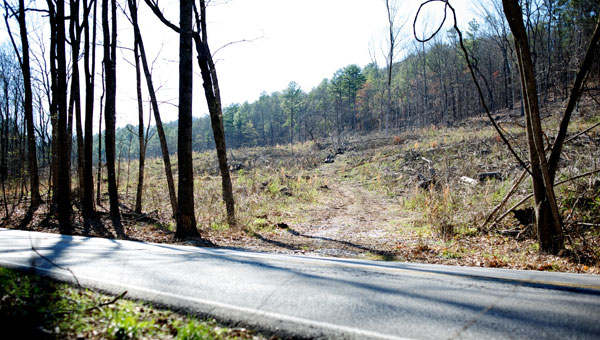 The owners of a clear-cut tract of land near Pelham's "tree tunnel" off State Park Road said they do not have any immediate plans to develop the property. (Reporter Photo/Jon Goering)

The owner of a portion of property in Pelham’s well-known “tree tunnel” on State Park Road near Interstate 65 said he has no immediate plans to develop the clear-cut property, but would be open to talks with developers.

According to the Shelby County land information tool, the cleared property to the west of State Park Road belongs to Birmingham attorney Gerald Colvin Jr., Charles Acker and Jim Barnes.

Although the property is nearly surrounded by Pelham city limits, it is in unincorporated Shelby County.

The land was cleared more than a year ago for timber, Colvin said.

“I am a part-owner of the property, and the cleared area was cut for timber,” Colvin wrote in an e-mail. “There is no development planned at the present time, but the owners would be open to discuss plans with anyone.”

A developer at the site may have to donate a portion of the property to the state for right of way off State Park Road, said Pelham Public Works Director Eddy Jowers.

“On that portion of the road in the tree tunnel, it’s not a dedicated right of way as such. It’s probably a prescriptive right of way, which is just ditch to ditch,” Jowers said.

“If they were going to build anything there, they would probably have to dedicate land to right of way,” Jowers added.

Because the tree tunnel land is in unincorporated Shelby County, Pelham has no control over developments on the site, said Pelham Mayor Don Murphy.

“They cleared that land about a year ago. I had some people contacting me when they started cutting down trees wanting to know what was going on,” Murphy said. “But that land is in the county, and is privately owned.

“I hate to see them cutting down trees, but it’s their property,” Murphy added. “They can do whatever they want to their property, and the city has no right to stop them.”

Road maintenance on the tree tunnel portion of State Park Road is a “gray area,” as several different entities are involved, Jowers said.

The Alabama Department of Conservation is responsible for maintaining the tree tunnel portion of the road, but the Pelham Public Works Department and the Shelby County Highway Department have stepped in to complete emergency repairs on the road in the past, Jowers said.

Jowers also said he would one day like to see State Park Road expanded to handle the high amounts of commuter traffic the road handles every day.

“We don’t have the right of way to be able to do so right now, but it would serve a lot of good if that road was widened one day,” Jowers said. “It used to basically just be an entrance to the state park, but now it’s an arterial road, and it has a lot more traffic.

“But it’s definitely not a simple issue,” Jowers added.