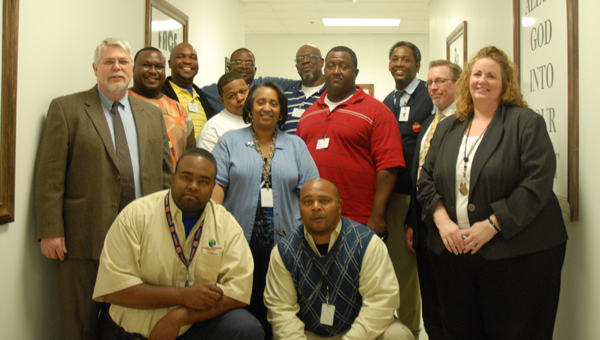 CEC alumni pose for a photo with Alabama Therapeutic Education Facility staff after the CEC Alumni Association held its first ever meeting in Alabama on March 16. (Reporter photo/Brad Gaskins)

COLUMBIANA – Crack cocaine, marijuana, pills – Damon Hooks sold them all in the Selma area at various times throughout a 15-year span.

Authorities knew his name, he said. They knew his face.

“There’s Hooks, come on, let’s pull him over,” Hooks said, imagining what police might have thought when they saw his car speeding down the road. “I bet he’s got some drugs on him.”

Nine times out of 10, Hooks said of his “stupid” past, authorities were right.

Locked up twice – first in 1995 and again in 2009 – Hooks said his life was a downward spiral of dealing and using drugs, until the Alabama Therapeutic Education Facility helped him chart a new, positive course.

The 35-year-old Hooks returned to the Columbiana-based facility, operated by Community Education Centers, Inc., on March 16 as a proud member of the CEC Alumni Association, which held its first meeting ever in the state of Alabama.

He was one of six alumni who spoke to about 70 current residents scheduled to graduate March 25. After graduation, the residents will either be released on parole or enter work release programs.

“I think it’s a great thing,” Hooks said after the two-hour meeting. “We need more guys to come and talk to these guys who have experienced it and are doing positive things with their lives now.” 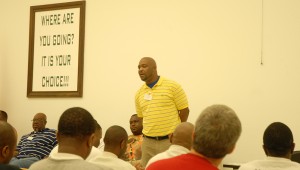 Organizers praised the meeting as a positive step for ATEF and praised the state of Alabama for its commitment to the program, which operates in 18 states and has residential re-entry facilities in 10 states.

Alumni meetings are held in about a third of the 18 states, according to Arthur Townes, director of alumni services for CEC.

Convicted for robbery in 1995 in New Jersey, Townes was released in 1998 after completing a CEC program in Kearny, N.J., and was never locked up again.

“I attest it to a lot of the treatment and re-education of myself that I received in the program,” the 44-year-old Townes said. “The fact that my life was spared and I was given a second chance, I’m kind of ordained to do the same for somebody else.”

He credited the state of Alabama for investing in the CEC program and said the state is “starting to see the fruits of the three-year labor” in Columbiana.

“For us to come down here in Alabama and present this and stand up for these guys to get the same opportunity, I’m so overwhelmed with emotion,” he said. “It’s probably going to keep carrying me for months. It’s just a great day.” 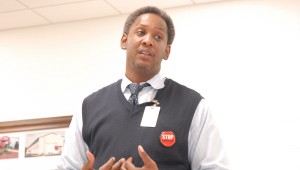 Townes led the meeting and introduced Hooks to the residents.

Hooks told them about his past: how he was locked up for 18 months starting in 1995, completed a work release program and was released before eventually falling back into to his old drug-dealing ways.

Hooks told of how he was locked up again in March 2009 and was admitted to ATEF, where he earned a G.E.D. and completed the program in September 2009. He encouraged current residents to learn from their mistakes and move forward with productive lives.

It wasn’t just lip service. Hooks has been practicing what he preached.

After graduating from ATEF, Hooks was transferred to a work release program in Camden and was released from state custody July 16, 2010. He enrolled at Wallace Community College the next month.

The single father of two kids is two semesters in to a two-year college program, after which he plans to study engineering at a four-year school. His sights are set on Auburn, though he’s already visited at least four other schools in Alabama.

He said he owes it all to the help he received at ATEF, which at any given time has 400 men in the program from the Alabama Department of Corrections. Some enter near the end of 20-year sentences, while others come straight from county jails, ATEF officials said. Graduations are held every six months. Residents are provided with a variety of programs.

“It’s a very intense program and you can get a lot from it,” Hooks said. “The sky is the limit.”

He served three years of a five-year sentence in New Jersey for a variety of charges ranging from possession of a weapon to stealing cars. In 1994, Hooper was one of the first state inmates in New Jersey to complete a CEC program. 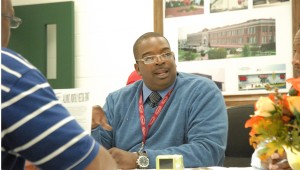 Keith Hooper, CEC's chairman of the executive board for the alumni association, speaks during a pre-meeting discussion at ATEF on March 16. (Reporter photo/Brad Gaskins)

“It’s very exciting [to be in Alabama],” said Hooper, who is now CEC’s chairman of the executive board for the alumni association. “It shows the commitment that they’ve made towards trying to do something different with state inmates. A lot of people won’t do this.”

Hooper praised the commitment of ATEF staff and the overall CEC program.

“When we come from prison, we don’t believe in nothing but what we see in that cell,” he said. “They taught us something different.”