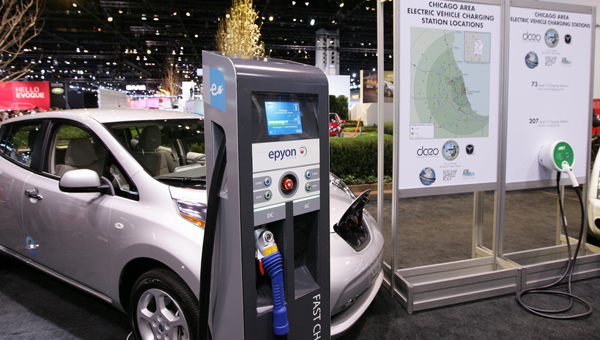 350Green, a San Diego-based business co-founded by Tim Mason, son of Columbiana's Bonnie Atchison, displays an electric car and fast charger station in February at the Chicago Auto Show. In a massive press conference, 350Green and the city of Chicago announced a partnership in which 350Green will design, build and operate a network of 280 Electric Vehicle charging stations throughout the Chicago area. (Submitted)

Tim Mason, son of Bonnie Atchison, co-founded 350Green two years ago to develop a national network of electric vehicle charging stations. The San Diego-based company recently announced partnerships with one state and a major U.S. city, and likely will show up at Shelby County properties in the coming years.

“I think it’s the most wonderful thing in the world,” Atchison said of her son’s success. “He’s worked so hard.”

Atchison, a Columbiana resident since 1977, is a retired Shelby County High School teacher, former 10-year director of the South Shelby Chamber of Commerce and current curator at the Museum of George Washington.

The business targets locations where consumers are already accustomed to driving. Most current business models for charging stations, the company says, are based for single stations in consumers’ garages.

“Our business model is really built around the fact that most studies are indicating that about 20 percent of the charging that people do of their cars will be done in public,” Mason said. “That being said, there needs to be convenient places to install those.”

Mason said the company shares the same goal as the Obama administration and Department of Energy, which is, he said, “to get infrastructure out there in the public that will allow people to be able to travel as they do with any other type of vehicle.”

350Green, in the last several weeks, has announced partnerships with the city of Chicago and the commonwealth of Pennsylvania.

Mason was standing in front of a hoard or reporters and cameras last month when Illinois Gov. Pat Quinn and Chicago officials announced at the Chicago Auto Show, the largest auto show in the world, that 350Green had been tapped to design, build and operate a network of 280 EV charging stations throughout the Chicago area. 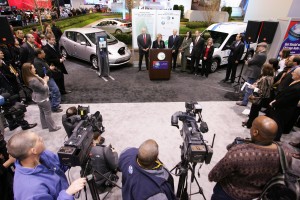 State and city officials announce Chicago's partnership with 350Green in February at the Chicago Auto Show. Tim Mason, wearing an orange tie, is the the second person from the right of the six individuals at the podium. (Submitted)

“No where in the world will you find that many fast chargers on about a two-mile grid,” Mason said.

Gov. Quinn said the project “will encourage greater use of green transportation alternatives by making electric vehicle use more convenient and accessible in one of the most heavily traveled cities in the world.”

Chicago Mayor Richard M. Daley said the project puts the city “on the cutting edge of national efforts to prepare for electric vehicles.”

Three weeks after the Chicago press conference, 350Green announced a partnership with Pennsylvania for 22 fast chargers and 44 Level 2 charging stations across the state, though predominantly located in and around Philadelphia and Pittsburgh.

“The important thing is aligning the different types of charging to how long somebody is going to be parked someplace,” Mason said. “If somebody is going to be in the mall for two hours, you don’t want to put a fast charger there that charges the car in 15 minutes that encourages a customer to leave in 15 minutes. Malls are built around the idea that they get you in there and you stay for a couple hours. They don’t want anything that may encourage a customer to leave.”

Mason said the majority of 350Green’s funding comes from tax credits, grants and private investments. He said the company expects to announce the awarding of more grants within the next few weeks.

“It’s going to be something we see everywhere,” he said, noting President Obama has stated a goal of 1 million electric cars on the road by 2015.

350Green has partnerships with some of the largest retailers and property owners in the country to provide charging stations for their properties, Mason said.

“I can guarantee you that there are property owners that we have contracts with that do have properties in Shelby County and, of course, in the state of Alabama,” he added. “I don’t see that we would be installing anything in Shelby County in less than sometime next year.”

That timetable, Mason said, “is really dictated by how and when electric cars are going to arrive from manufacturers in Alabama.”

Mason thanked his mother for her support, calling Bonnie Atchison “my hero.”

Atchison recalled a conversation she had with her son several years ago as he planned a venture for a national network of electric charging stations.

“Mama,” Bonnie quoted Tim as saying, “if it ever comes true, you can say that it was invented on my kitchen table.”

FROM STAFF REPORTS The Coosa Valley Academy baseball team swept a doubleheader March 16 during its trip to Florida. The... read more