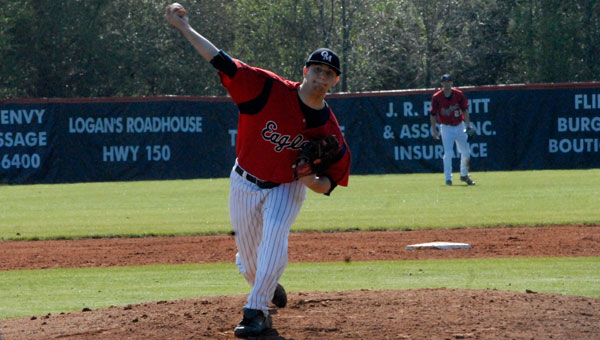 HOOVER — A late rally by the Oak Mountain High School baseball team fell short in the final inning in a 7-6 loss to Oxford in the Buccaneer Classic quarterfinals March 17 at Hoover High School.

Heath Quinn led Oak Mountain at the plate as he finished 3-for-3 with a solo home run. Quinn drove in a run and scored two runs in the loss.

Will Nobles took the loss after giving up the game-winning run in the bottom of the seventh inning. Knotts started on the mound and gave up six runs on nine hits with three strikeouts and three walks.

The Eagles took a 1-0 lead in the top of the first inning. Crowe led off the game with a double before scoring on a passed ball.

Oxford tied the game at 1-1 in the bottom of the first inning before Quinn blasted a solo homer to the deepest part of the field in the top of the second to give Oak Mountain a 2-1 lead.

Oxford tied the game at 2-2 in the bottom of the third inning. The Eagles responded with two runs in the top of the fourth inning to take a 4-2 lead. Hubbard opened the inning with a single before scoring on a sacrifice bunt by Lubresky. Quinn, who reached on a single to left field, scored on an Oxford error.

The Eagles rallied to tie the game at 6-6 in the top of the seventh inning. Crowe led off with a single before scoring on an Oxford error. Knotts reached base on an error and scored on an error.

Following a groundout, Nobles hit two batters back-to-back with pitches in the bottom of the seventh inning and gave an intentional pass to the next batter to load the bases for a potential inning-ending double play. Oxford ended the game with a sacrifice fly to right field, which plated the game-winning run.