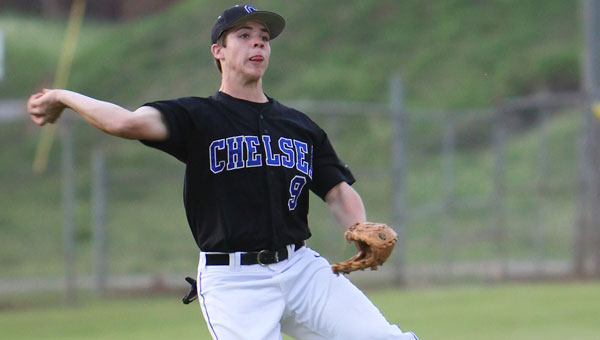 Chelsea High School junior Alex Dean throws to first base in the Hornets' 13-3 win over Talladega in a Class 5A, Area 7 contest March 22. (Contributed/Cari Dean)

The Chelsea High School baseball team bounced back from its offensive struggles in the Lake Martin Classic by beating Talladega 13-3 in Class 5A, Area 7 action March 22.

Tripp Hobbs threw only 52 pitches in his fifth complete game of the season, giving up two earned runs on four hits with 7 strikeouts.

Eli Bashour led the Hornets at the plate as he finished 3-for-3 with two doubles. Bashour drove in six runs in the victory.

Hunter Picklesimer finished 2-for-3 and drove in four runs. Alex Dean went 2-for-3 with a double and drove in a run.

Jake Campbell finished 1-for-3 with a double and drove in a run. Joey Mock went 2-for-4 and scored a run.