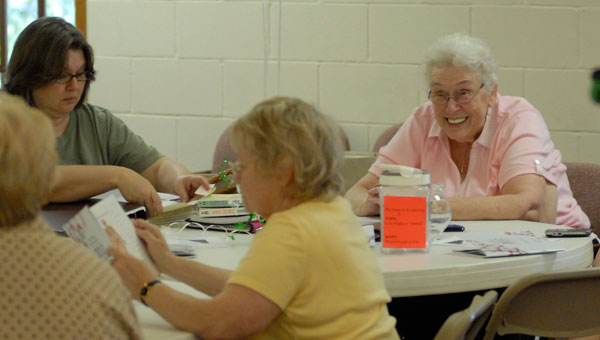 Pelham resident Lorraine Kuhl, right, smiles while she leads a meeting of the Taking off Pounds Sensibly group at the St. Francis of Assisi Episcopal Church in Indian Springs. (Reporter Photo/Neal Wagner)

When Pelham resident Lorraine Kuhl takes her seat at the head of the table each week during the “Taking off Pounds Sensibly” group meetings at St. Francis of Assisi Episcopal Church, one thought continually runs through her mind.

“I always want to be losing weight and reaching my goals,” said Kuhl, who will soon begin her second year as the peer-support group’s leader. “I’m not a good leader if I’m not losing weight each week.

“That’s what keeps me going. If I’m not leading by example, I shouldn’t be this group’s leader,” she added, shortly after the scale revealed she did not gain weight since the previous week.

Every Tuesday night, Kuhl and as many as 16 of her peers gather at the church to take a realistic, sensible approach toward losing weight and keeping it off.

Each week, a different group member leads the meeting in any way they see fit. Some meetings focus on nutritional information, some weeks feature exercise plans and others simply revolve around stories.

“Lori did an entire meeting on bananas one week,” Kuhl said with a laugh as she pointed to group member Lori Anthony. “This is a very good and cohesive group, and it’s a very intelligent group.

“We socialize and laugh a lot, but when we have to get serious, we get serious,” Kuhl added.

Every group member must set a doctor-approved weight loss goal when they begin attending meetings, and the goals usually promote gradual, sustained weight loss over time.

“Everyone has to get a slip from their doctor that says, for instance, you can lose 10 percent of your weight,” Kuhl said, noting she eventually plans to lose 100 pounds from her original weight. “Once you reach that 10 percent goal, you can go back to the doctor and get another slip. It makes more sense to do it like that.”

Once a group member has reached their target weight, they enter the Keeping off Pounds Sensibly category.

Birmingham resident Dale Smith, a member of the Indian Springs group who is currently serving as the TOPS Club State King of Alabama, attends the weekly meetings in an attempt to remain at his target weight.

“I believe that without this support group, I would not be able to keep the weight off,” said Smith, who lost 64 pounds through the group. “Everybody hates to come in here and say ‘I gained 6 pounds this week.’

“I jumped on a scale three years ago, and I weighed 100 pounds more than I did in college, where I was a varsity swimmer,” Smith added. “When I started coming here, the weight started coming off fast.”

The group meets every Tuesday night at the church from 6-7 p.m. Group membership is $26 per year, plus $10 in dues each month.

Past secretary of state to be Tradition chair

Former U.S. Secretary of State Condoleeza Rice has accepted an invitation to be honorary chairperson for the upcoming PGA Champions... read more