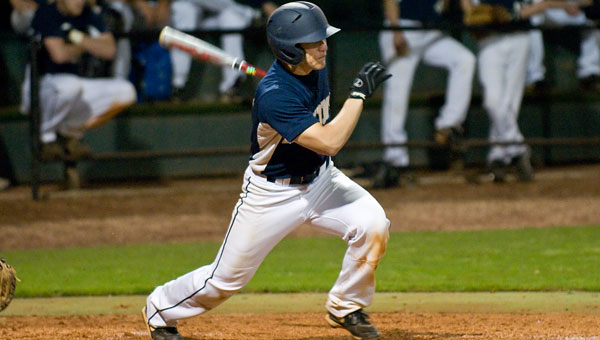 Briarwood Christian School junior Matthew Furuto heads to first base after a hit in the Lions' 12-3 win over visiting Shelby County in a Class 5A, Area 7 contest March 22. (Contributed/Pam Hard)

NORTH SHELBY — Briarwood Christian School baseball coach Steve Renfroe didn’t know how his lineup would fare against Shelby County sophomore Bailey Benton, who is capable of throwing any of his pitches on any count, in an Alabama High School Athletic Association Class 5A, Area 7 contest March 22.

Renfroe was pleasantly surprised to see the Lions scored 12 runs and rack up nine hits in a 12-3 area victory over the Wildcats. Led by leadoff hitter Matthew Furuto, who reached base in all five plate appearances and drove in four runs, Briarwood Christian cruised to victory.

“I was proud of their approaches (at the plate),” Renfroe said.

Shelby County returned to the site of the program’s crowning achievement, where the Wildcats dispatched the Lions from the AHSAA Class 5A playoffs and earned a spot in the third round for the first time in school history.

However, most of the lineup and the Wildcats’ top two pitchers graduated during the offseason, leaving Shelby County coach Shane Beasley with an inexperienced squad.

“All you can ask is to keep getting better, and we are,” Beasley said. “We’re working on it.”

Logan Crook earned the win on the mound after giving up three runs on five hits with seven strikeouts and two walks in five innings. Cameron Adams allowed only one baserunner in the final two innings in relief.

Mike Pate led Shelby County at the plate as he finished 2-for-2 and drove in a run.

Shelby County took a 1-0 lead in the top of the first inning. Following a groundout, Benton reached on a Briarwood Christian fielding error before scoring on an RBI single to right field by Pate. Pate’s single followed a single by McNeal, who was stranded at third base when a double play ended the inning.

Briarwood Christian responded with a run in the bottom half of the inning to tie the game at 1-1. Furuto reached on a Shelby County fielding error and scored on a single by Craft.

The Lions took a 3-1 lead following two runs in the bottom of the second inning. Thomas reached after being hit by a pitch before Benton walked Robby Hale to put runners on first and second base. Thomas and Hale scored on a two-run single to left field by Furuto.

Briarwood Christian pushed its lead to 6-1 with three runs in the bottom of the fourth inning. Pearson opened the inning with a walk. With two outs, Benton issued walks to Wynne Morris and Furuto, who each scored along with Pearson on a three-run double to left field by Robert.

The Lions added another run in the bottom of the fifth inning to push their lead to 7-1. Pearson lined a single to center field before scoring on a bases-loaded walk to Furuto.

The Wildcats scored two runs in the top of the sixth inning to cut the deficit to 7-3. McNeal led of with a single to left field and scored on a bases-loaded walk to Falkner. Pate singled to left field, and Berle scored on a double-play groundout by Wilcox.

The Lions clinched the victory with five runs in the bottom of the sixth inning.

Following a ground out to open the inning, Foster singled to left field before scoring on an RBI triple by Hooper. Hooper scored on an RBI groundout by Pearson.

Adams sandwiched a strikeout between to fly ball outs to close out the game in the top of the seventh inning.

The Briarwood Christian victory keeps the Lions near the top of the Class 5A, Area 7 standings.

“Hopefully, the last week (of area play) will mean something,” Renfroe said.