Past secretary of state to be Tradition chair 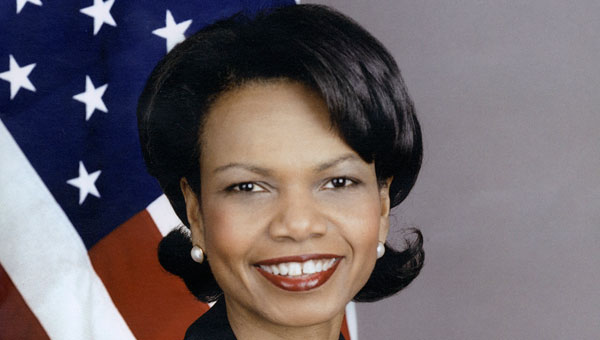 Former U.S. Secretary of State Condoleeza Rice has accepted an invitation to be honorary chairperson for the upcoming PGA Champions Tour's Regions Tradition major championship May 5-8 at Shoal Creek. (Contributed)

Former U.S. Secretary of State Condoleeza Rice has accepted an invitation to be honorary chairperson for the upcoming PGA Champions Tour’s Regions Tradition major championship May 5-8 at Shoal Creek.

Gene Hallman, president and CEO of the Bruno Event Team, which is coordinating the Regions Tradition, called Rice’s presence “very special for the entire event.”

Champions Tour President Mike Stevens said the event is fortunate to have a chairperson with Rice’s credentials.

Rice took up golf in 2005 and joined Shoal Creek as a non-resident member in 2009. The 20-handicapper played in a pro-am in Los Angeles last month with PGA Tour professional Steve Stricker. Rice is expected to hit the opening ceremonial tee shot at the Regions Tradition to commence the tournament.

“It is a privilege to serve as the honorary chairperson for the Regions Tradition,” Rice said. “This major championship is creating enormous interest in the community and stands to make a significant economic impact in Birmingham and the state of Alabama.”

Rice is currently the Thomas and Barbara Stephenson Senior Fellow on Public Policy at the Hoover Institution, a professor of political economy in the Stanford Graduate School of Business and a director of its Global Center for Business and the Economy. Rice served as a senior advisor to the Board of Directors of Regions Financial Corp., the title sponsor of the Regions Tradition, since 2009.

The Tradition major championship has been played at three different sites since its inception in 1989, including the past four years at the Crosswater Golf Club in Sunriver, Ore.

Regions Tradition events will start May 3 with a practice round, a par 3 competition and a past champions clinic. A pro-am and an Alabama vs. Auburn putting challenge will take place May 4 before the first round of the tournament begins May 5.

The Children’s Hospital of Alabama will be the primary charitable beneficiary of the Regions Tradition. For more information, visit RegionsTradition.com.