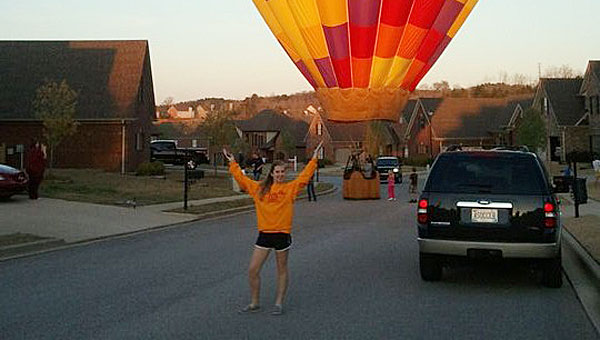 When Pelham High School freshman Kaitlin Moon and her family exited off Interstate 459 March 16 while returning home from a vacation to Gatlinburg, Tenn., they thought little of the orange, red and yellow hot-air balloon they saw hovering above Helena.

After the family arrived home, they unloaded their vehicle and prepared to travel across town to The Depot restaurant a few miles from their home in the Old Cahaba neighborhood.

But before they could get out of their neighborhood, they were halted by one of the strangest roadblocks they had ever encountered.

“We were going to The Depot, and we saw it gradually coming down,” Moon said. “We thought it was going to land on one of our neighbors’ houses.”

The hot-air balloon the family had seen while exiting the interstate had run out of fuel, and was forced to make an emergency landing. Though the balloon’s pilot said he was attempting to land in an unpopulated area of Helena, the day’s high wind gusts had other ideas.

“We saw it coming down, so we stopped and got out. The guy piloting the balloon yelled ‘hold on,’ and landed right in the middle of the street,” said Stephanie Lucas, Moon’s mother. “It stopped traffic for a while, and the guy had to call a tow truck to get the balloon out of there.

“We see hot-air balloons flying all the time, so we didn’t think twice about it when we saw it in the sky,” Lucas added.

It didn’t take long for the emergency landing to draw a gathering on the neighborhood street.

“Everyone ran up to him (the pilot) and was asking him questions. A guy was even asking the pilot if he gave rides,” Moon said. “It was so unexpected and so random.

“I’d have to say it was one of the craziest things I’ve seen.”