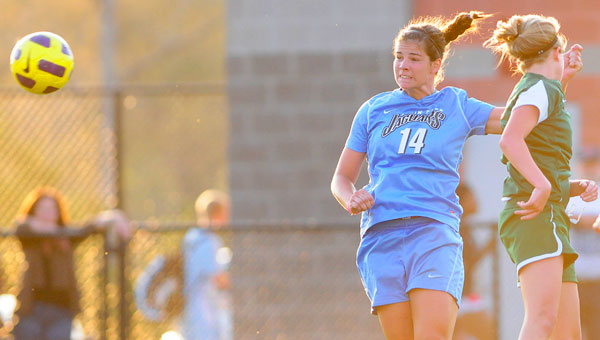 HOOVER — Spain Park High School girls’ soccer coach Robert Starr reminded his Jaguars, who are the two-time defending Alabama High School Athletic Association Class 6A champions, of one thing they haven’t accomplished the past two years before a match with Mountain Brook in the Metro soccer tournament final March 26.

Despite the Jaguars’ success in the state tournament, they haven’t yet been crowned the Birmingham metro area’s champions — until now.

Steyn put Spain Park on the scoreboard with her goal less than eight minutes into the contest. Steyn netted the goal, which gave Spain Park an early 1-0 lead, with a head shot at the net after putting herself in perfect position on a free-kick feed by Eddy from the right side of the field.

Eddy capped the scoring with her goal with 9:05 remaining in the opening half. Eddy scored her goal, which gave the Jaguars a 2-0 lead, on a penalty kick following a foul deep in Mountain Brook territory.

The first 35 minutes of the second half passed without a goal by either team before Mountain Brook put a late scare in the Jaguars.

Mountain Brook cut the Spain Park lead to 2-1 with a deep shot over the top of goalkeeper Schyler Arnold’s hands with just 4:23 left in the contest.

Arnold made a game-clinching save on another deep attempt by the Spartans with less than 10 seconds remaining.

The Jaguars defeated Vestavia Hills in the tournament semifinals in a 9 a.m. match.

Starr called the tournament’s final two matches, which capped a run of six matches in six days, an endurance test for Spain Park. Starr said the Jaguars played well in the second half against Vestavia Hills and the first half against Mountain Brook before fatigue became a factor.

“For us it is trying to get better before the end of the season,” Starr said. “For the first time this season, we put two good halves together.”