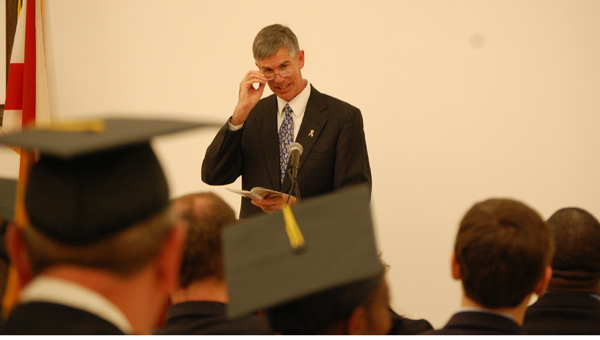 The Columbiana-based facility is operated by Community Education Centers Inc. and has 400 residents at any given time. Residents come to ATEF from the Alabama Department of Corrections.

Upon completion of the six-month ATEF program, residents either enter a work release program or are released on parole.

“It’s been absolutely nothing but a positive,” Columbiana Mayor Allan Lowe said during the hour-long ceremony at the facility.

Lowe thanked ATEF staff for their commitment to the program, and noted that in three years not once has the Columbiana Police Department been called to the facility.

The facility is “one of the jewels in our crown,” Lowe added, referring to the city of Columbiana.

Thomas read a Bible verse, Philippians 4:2, to the graduates: “Let each of you look out not only for his own interests, but also for interests of others,” he read.

“That’s what I want to challenge you to do today,” Thomas added. “Today is the time to celebrate and to be thankful for everything that you’ve committed to doing, but I challenge you tomorrow to give back. Take the things that you have learned while you’ve been here for six months, use it to be yourself to give back to somebody else.”

In three years, 2,692 residents have entered the facility, and 1,826 have graduated, according to Michelle Sylvester, director of student services for the Alabama Department of Postsecondary Education.

“This is an opportunity that you’re very fortunate to have had,” ATEF Director Mike Hadley told the graduates. “I wish every one of you the best.”